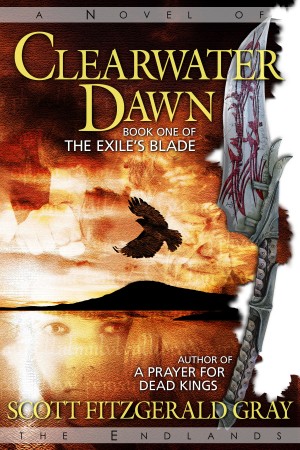 The princess faltered. Chriani saw the flick of her eyes, the gleam of blue catching the light as he twisted to follow her gaze. He’d left the dark door open behind him. In the faint light of the corridor, his eyes caught the ripple of shadow that meant movement in the distance. Footsteps, almost silent.

“You fool,” she whispered.

Chriani wasn’t listening, sheathing his sword with effort as he turned for the door, made to call out to whoever was racing toward them. No idea what he was supposed to say, but he was fairly certain that begging for mercy would be a large part of it.

Then Lauresa was moving behind him, one hand across his mouth even as the other brought the dagger up, close to his throat as she dragged him back. Chriani was startled, as much at being grabbed at all as he was at the strength in her arm. As he stumbled back, though, he felt instinct override any uncertainty. Her blade was a hand’s-width from him, more than enough space to go for her wrist. No room to get a decent strike in with the other hand, but her flank was vulnerable and in easy reach, or the soft muscle of her thigh, one sharp blow that would drop her.

But even through the instinct, through all the memory of all the hand-to-hand training he’d done at Barien’s side, he knew he couldn’t do it.

No idea what any of this was about, but he couldn’t hurt her. Not anymore.

Scott Fitzgerald Gray (9th-level layabout, vindictive good) is a writer of fantasy and speculative fiction, a fiction editor, a story editor, and an editor and designer of roleplaying games — all of which means he finally has the job he really wanted when he was sixteen. He shares his life in the Western Canadian hinterland with a schoolteacher, two itinerant daughters, and a number of animal companions. More info on him and his work (some of it even occasionally truthful) can be found by reading between the lines at insaneangel.com.

About the Series: The Exile’s Blade

Love, death, and obligation drag a young soldier into a world of political turmoil he never sought to be part of — and place him at the center of a web of ancient magic that threatens to bring five nations to the brink of war.

Also in Series: The Exile’s Blade

Clearwater Dawn looks to be a first novel by Scott Fitzgerald Gray, as a quick internet search shows some published works in fantasy gaming resource books and this full length novel. Epic Fantasy is a genre that has no end to selection for fans, but it is short on quality, particularly from those looking for new promising writers. Normally what I find from writers publishing their first novels of Epic Fantasy too often fall into the trap of trying to put too much "world" into the pages at the expense of story. They focus too much on showing they have a fantastic new world with intricate politics and multitude of races and creatures but forget to tell a story within that setting that is worth the readers time. Lucky, Clearwater Dawn is not like those other first time efforts. Scott Fitzgerald Gary's debut is as good a read as any in Fantasy that you will find anywhere. At the core a love story set within a story where little is as it seems - like many others - but what sets it apart is the depth of character which brings the reader deeper into the story. However, the reader is always aware from the small bits of information the author slowly reveals as this first story is told that it is clear that Scott Fitzgerald Gray has a world as complex and interesting as any in the Fantasy genre and I look forward to reading as many tales set within that world as he has to tell. This novel will not disappoint you; buy yourself a copy and you will be looking for more when you are done.

Due to review commitments I do not get to read as much fantasy as I used to, which is really a shame. As a matter of fact the last true “fantasy” review I did was over a year ago. But, thanks to Clearwater Dawn by Scott Fitzgerald Gray I know that I’ll be picking up more in the near future, especially since this is the first book in a planned series. I recall how much fun Raymond E. Feist’s Magician was the first time I read it. That true joy of finding a well-written, creative, and stirring piece of fantasy fiction is hard to replicate. I remember being spellbound by the depth of the characters, the unique and unusual use of magic, the truly original plot, and the new worlds fully created out of nothing more than the imaginations of the author and his audience. Clearwater Dawn had much the same effect on me and, in my opinion, is every bit as good as the stories of the Riftwar series. I cannot pay more of a compliment to Mr. Gray’s work than to compare it with that classic series. The Riftwar books remain one of my all time favorite fantasy series and one of the few that I’ve read more than once. The Exile’s Blade series will be my next.

Clearwater Dawn falls into that category of near-classic fantasy simply waiting for an audience to find it. Indeed, it’s hard to believe that this book is self-published and selling for only .99 in the Kindle store at Amazon and the Nook store at B&N. The story is clearly written by someone well-versed in the world of fantasy creation and a search of Mr. Gray’s past achievements will confirm that he is a long time author of Dungeons & Dragons manuals, campaigns, and narratives. As luck would have it, that previous experience carries over nicely into this novel. The locations are elaborate but not verbosely so and the characters are both believable and down-to-earth (including the princess who should be haughty but isn’t.) There is murder, and court intrigue, and secrets, and quests, and magic, and secret doors, and arranged marriages, and war and all the things you’d expect to find in a first-class fantasy adventure. With that said, the story is, of course, not perfect and the minor clichéd plot of a noble fugitive is trope-worthy but all-in-all the story is written well enough for that insignificant point to go relatively unnoticed. If you’re anything like me the “what’s going to happen on the next page” factor will have you turning pages furiously and the various character relationships will keep you interested until the very end. This was an enjoyable read and I’m happy to say that I’d recommend it to any and all fantasy fans (no matter age, fealty, or coat-of-arms.)

You have subscribed to alerts for Scott Fitzgerald Gray.

You have been added to Scott Fitzgerald Gray's favorite list.

You can also sign-up to receive email notifications whenever Scott Fitzgerald Gray releases a new book.