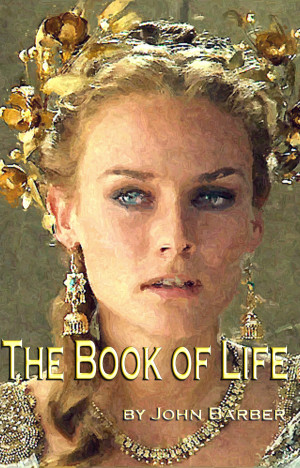 The Book of Life

By John Barber
Ben Davies a director of the Fordhamton Corinthian Football Club is found in the supporters bar with his throat cut. The directors were already in the boardroom.
Davies’ death meant that the Club were liable for huge debts. An offer from Topper Supermarkets to purchase the ground meant that the remaining nine directors would benefit from the sale; and thereby each one becomes a prime suspect. More
Ben Davies a director of Rutherford Corinthian Football Club is found in the ground floor supporters bar with his throat cut. The other ten directors had already gathered for an Emergency General Meeting in the first floor boardroom.
Detective Chief Inspector Steve Winwood discovers that the founder of Rutherford Corinthian Football Club was considered insane. He had established a Trust to pay for the running costs of the Club and wrote the rule book by which the club was to be operated. Some rules were quite bizarre although true to the Corinthinian ideal such as the goalkeeper standing aside for penalty kicks.
As he digs deeper into the rules of the club suspicion falls on the directors who are likely to make a substantial financial killing if the Fotball Club and the ground is sold. Peter Redbourne Managing Director of Redbourne Brewery who sponsors the Club is never far from suspicion either.
Ben Davies past is shrouded in secrecy but as Winwood uncovers his ties to Rutherford and the financial world in which he works and from tha the reason for his killing
A conspiracy amongst the directors slowly unwinds until the solution to Davies’ murder is found amidst the very eccentric and unique way that the Trust was set up.
This can be read as a sequel to Murder at the Fleetwood but the book begins with a very brief recap of the events at the Murder Mystery Weekend, the previous book in the series.
Available ebook formats: epub mobi pdf lrf pdb txt html
First 20% Sample: epub mobi (Kindle) lrf more Online Reader
pdb
Price: $2.99 USD
Buy Add to Library Give as a Gift
How gifting works
Create Widget
Tags: black humour property investment financial investments cozy crime fiction series english football club corinthian ideals supermarket wars
About John Barber

Reviews of The Book of Life by John Barber