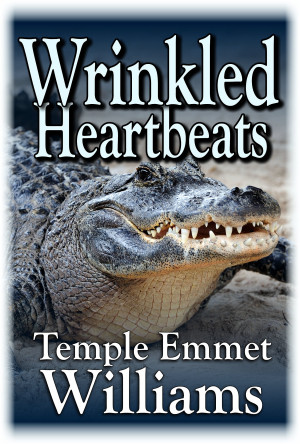 For the warrior, medically-induced flashbacks to the bloodiest battle in the history of the Marine Corps ̶̶ the retreat of NATO forces from the Inchon Reservoir during the Korean Conflict ̶̶ becomes a life-threatening allegory in the book.

Wrinkled Heartbeats is the author’s first novel. Midwest Book Review calls it: “a deftly crafted and extraordinary novel, very highly recommended.” It was a Finalist in the prestigious 2016 Next Generation Indie Book Awards. It received the award as one of the best First Novels of the year. It won the Silver Medal in the crowded Action Fiction category at the Readers' Favorites Awards ceremony in Miami. It has received Awesome Indies Approval.

Temple is a journalist nominated twice for a Pulitzer, an author, a publisher, and editor. His award-winning books include Warrior Patient, Wrinkled Heartbeats, and Poison Heartbeats. He writes both non-fiction and fiction with humor and the quick, sharp punch of journalistic truth.

Temple was born in Cleveland, Ohio, and educated at Yale University. He is an ex-Marine and an ex-NYC cop.He began his writing career in 1964 as an undercover, investigative reporter for the World Telegram & Sun in New York City.

He was the Managing Editor of News/Check, an international news magazine in Africa, and then an Editor at the Reader’s Digest in the United States.

He worked as a copywriter at large ad agencies like Ogilvy & Mather and Leo Burnett. He was the Creative Director of the fifth largest ad agency in Great Britain, part of the KMP Group in London, England.

He lived in Africa for six years and in Europe almost as long. He and his wife, who is also his editor, now live in Boca Raton, Florida.

You have subscribed to alerts for Temple Emmet Williams.

You have been added to Temple Emmet Williams's favorite list.

You can also sign-up to receive email notifications whenever Temple Emmet Williams releases a new book.