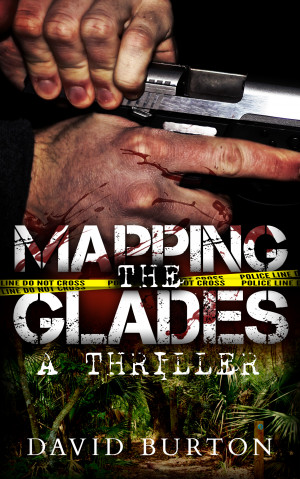 Rated 4.00/5 based on 1 reviews
A stolen million.
A gangster who wants it back.
A reclusive writer who doesn't
give a damn.

Mapping the Glade’s is a thriller set in the Everglades. Harrison Park is an ex-DEA agent, now a successful writer who has lived in seclusion since death of his wife. Trouble arrives with his step-son, Pauly, and his girlfriend, Tracy, who has stolen money from a California gangster, Raul Geoshay. More
A stolen million.
A gangster who wants it back.
A reclusive writer who doesn't
give a damn.

Mapping the Glades is a fast paced thriller
set in the Everglades. Harrison Park,
an ex-DEA agent is pitted against a desperate
California gangster.

Harrison, now a successful writer, has
lived in virtual seclusion on the edge
of the Everglades for three years since
the suspicious death of his wife. Trouble
arrives with his step-son, Pauly, who
Harrison believes was involved in his
wife's death. With Pauly is his girlfriend,
Tracy, who has stolen money from, Raul Geoshay
who needs it back to save his own life.

As Raul's actions and Harrison's search
for him become more intense, Harrison
learns the awful secret of his wife's
family and how she really died.

David Burton is an American writer living in sunny Southern California. He traveled by motorcycle through Mexico, US, Canada and Alaska. From motorcycles he turned to the ocean, building and sailing his own boats to Mexico, Tahiti, Hawaii, and through the Panama Canal to Florida. He spent a lot of time reading while on the water, so he decided to write books he would have wanted to read at sea.

Having swallowed the anchor he now mops floors and collects trash for money, writes for a living, and has become a (temporarily?) unrequited sailor.

Harrison Park is the main character in Mapping the Glades. The story is set in Florida where he lives in self-imposed isolation. Harrison is an ex-undercover DEA agent turned crime writer. Throughout the story we learn of the guilt, hate and shame he has fought after leaving the DEA and since the death of his wife.

Raul Geoshay is the wrong man to cross; he's pure evil and the perfect antagonist in the plot.

What I liked in this story is the interesting storyline that moved almost non-stop. The action was intense and the winning side switched back and forth like a Ping-Pong ball in a tournament.
The characters are developed so the reader knows exactly who and what they are. It's done over time of course, because it's not all presented in an info dump.
Undercurrents of past loves and deeds linger in the background as a multitude of characters attempt to position themselves for the love or revenge they crave.
The story is well written with infrequent editing errors

What I didn't like about Mapping the Glades is the way several scenes ran together without separation.
There were also several outright errors in the writing. At one point a woman is handcuffed with her arms behind her and around a large post, and then she wipes her hair out of her face.
At the scene of an accident on a bridge a man slides off the elevated deck, into the water with a black book in his hands. Nothing was mentioned of it being ruined by the water or how Pauly and Tracy took possession of it.
The name Spencer was substituted several times for the character Simone, simply a poor editing oversight.

Readers who are offended by depictions of frequent sexual situations, extreme violence, rape, incest, torture and cursing should take note that it occurs often here.

Overall, I enjoyed Mapping the Glades and recommend it for hardcore crime and mystery fans.

You have subscribed to alerts for David Burton.

You have been added to David Burton's favorite list.

You can also sign-up to receive email notifications whenever David Burton releases a new book.