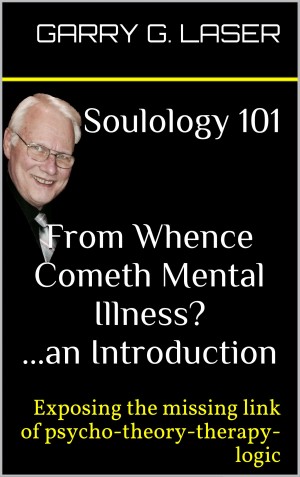 There is more than a computer mouse linked to thought sourcing obedience. Why spend money on 'Psycho-Theory-Therapy-Logic' when you can have FREE help to rid the "self" in your soul from all mental and emotional hellish issues?

The human brain is an amazing organ and it is used by our will, our mind and our emotion. The brain however is not the soul nor is the brain the seat of mental illness nor is it from where mental and emotional hellish issues are sourced.

So what function does the brain play as we understand mental illness and how it affects the neuro chemistry of the brain? I would suggest that the brain must be viewed to be the playground in which, what we in our society call mental illness, gets to hard wire certain pathways for thought patterns and emotional triggers.

The brain becomes the storage and the processing center of something which it is not in and of itself. The brain is not the soul, yet the major functioning elements of the soul use the brain to accomplish the purposes of the source from whence cometh the thought source mastery over the human soul.

The human soul has long been an enigma. Many a person has had thoughts as to why we do what we do and how what we do has such control over the way we think and feel, or is it the other way around - we often wonder. As we can so readily see, the soul presents a great opportunity for studying the human being.

The study of the human soul goes way back to the Greek philosophers such as Aristotle, Plato and Socrates among others. They themselves were seduced by their pantheistic religion and the mythology they loved and accepted.

Among this mythology we find many names of gods and goddesses, and on further study we find that each such deity of man was a deity of insufficiency and of need. Among the many mythology names we come across the names of a young maiden by the name of Psyche, the goddess of Aphrodite, her son Eros and the love child of Psyche and Eros being the daughter by the name of Hedone, meaning pleasure and bliss.

In mythology, the young and beautiful maiden Psyche was a melancholic, always strongly regretful and mourning lonely person. She was sick in body and woefully wounded in her heart. She loathed who she was, her beauty even when the world seemed to love her and admire her for her beauty. Eventually Psyche became fixated on the ever increasing desire for Eros. Her desire was for the god of desire.

According to mythology, everything came together, Aphrodite, the goddess of love and beauty, her son Eros and his wife Psyche and their daughter Hedone. Apparently all came together in love and ‘soul’ for that is what the word psyche means.

Psyche has thus become the Greek word we use for soul even in the Greek words of Scripture. And that is not where the problem lies. The problem I wish to address in this series of books and writings is that the study of psycho-logic has its origins in this milieu of self-serving, and self-indulging hedonistic desire for the god of desire and pleasure.

Sigmund Freud is often touted as being the father of modern psychology, and as he studied the human soul he was always drawn to the sexual aspect of human suffering just as in Greek mythology.

About the Series: Soulology - Your Mental Health Counts

The term Soulology is being used instead of psychology for the simple fact that the Christian understanding is that man is a human being who has three life functioning capacities. The spiritual, the physical and the soulogical or psychological. The "science of Psychiatry and psychology" however omit the non rational and intuitive conscience study of the spiritual capacity. They say it can't be seen therefore it can't be scientific. Soul-Logic focuses on the primary capacity as being the spiritual thought sourcing and deriving our character of the soul from a spiritual source.

PinPoint Soul-Logical Understanding is what this series aims to provide.

You have subscribed to alerts for Garry G. Laser.

You have been added to Garry G. Laser's favorite list.

You can also sign-up to receive email notifications whenever Garry G. Laser releases a new book.