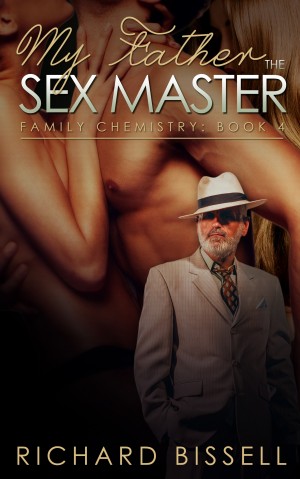 On Jimmy's last college spring break to Florida, he and Kim meet a young woman who might be that someone, but is there room in her life for them? And with Jimmy needing to make a choice about his life after college, is there even a way to make any of this work?

As their mutual relationship deepens, some hard decisions have to be made by all three of them, decisions that may pave the way for their future—or snuff it out before it begins.

My Father the Sex Master is a standalone novel that can be read independently of the first three yet brings the Family Chemistry series to moving and thought-provoking conclusion.

Col. Richard F. Bissell, USMC (Ret.) is a globe-trotting adventurer–cum–soldier-of-fortune–cum–“security specialist” who amuses himself in his spare time by writing cheap erotica. When not being shot at or otherwise threatened with sharp objects, he lives alone in a heavily fortified compound outside Washington, D.C.

Mr. Bissell’s wildly popular debut novel, Call Girl Cheerleaders, cannot be made acceptable to modern e-book publishers and has therefore been released into the wilds of the Internet. Those desiring to read it are directed to Google.

Mr. Bissell disdains social media and his .gov email address is too vulnerable to hacking to be used for fan mail. He can be reached through his colleague Michael Dalton, who has grudgingly agreed to pass along any correspondence. Mr. Dalton requests that such missives be submitted through his web site  or via Twitter.

You have subscribed to alerts for Richard Bissell.

You have been added to Richard Bissell's favorite list.

You can also sign-up to receive email notifications whenever Richard Bissell releases a new book.