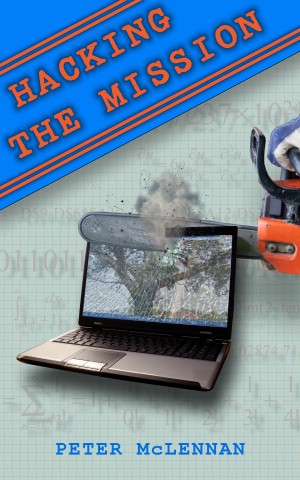 By Peter McLennan
Jason expects the loggers to be furious because he trashed their stuff. Why aren't they? And why don't they just give up, since the greenies have found something that means they can't cut down the trees anyway? Weirdest of all, why are they messing with other people's computers? The nerd in Jason can't resist investigating, but what he discovers jeopardises the whole campaign to save the forest. More
Fourteen-year-old Jason can't say no when Emma from school asks for his help to stop a logging company. But Jason's behaviour takes a turn for the worse after he receives some bad news, and he gets into a serious clash with the loggers. Curiously, the loggers don’t react as expected.

Things get even stranger when weird computer glitches suggest the loggers are up to something. Using his computer smarts, Jason starts to investigate but it isn't long before he runs into technical difficulties.

Luckily that mightn't matter because Emma's father has discovered something that brings the logging to a halt. But when Jason gets computer help from a surprising source, he makes a shocking discovery of his own that makes him wonder whether he should stay on Emma's side or quit the fight altogether. Unfortunately, getting the evidence he needs will require more bad behaviour.

Peter McLennan served for 28 years in the Royal Australian Air Force, where he focused on strategic planning. He has tertiary qualifications in engineering, information science and government, and a PhD in planning for uncertainty. He has had several non-fiction titles published.

About the Series: Who Will Save the Planet?

Jason might be only a teenager, but that doesn't stop him from taking on greedy adults who dare to trash his planet.

Also in Series: Who Will Save the Planet?

Reviews of Hacking the Mission by Peter McLennan

You have subscribed to Smashwords Alerts new release notifications for Peter McLennan.

You have been added to Peter McLennan's favorite list.

You can also sign-up to receive email notifications whenever Peter McLennan releases a new book.