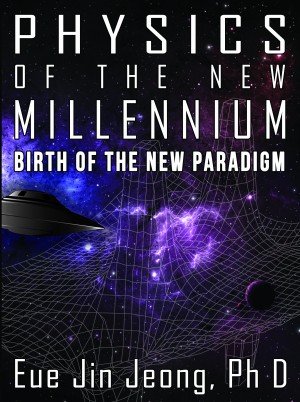 By Eue Jin Jeong
This book presents the paradigm shifting knowledge investigated by mathematical and physical analysis. The errors in the past scientific paradigm are exposed and corrected.
The birth of the new paradigm is pronounced. Life long quest looking for the solutions to many mysteries of the universe presented by Eue Jin Jeong PhD More
Sample From the Book

Anyone who has seen the coral castle will wonder how one man could have built such a gigantic coral stone structures without using any of the modern day weight lifting machinery. If we could believe it was just a magician's trick, it would not have been such a marvel. The problem was that Ed Leedskalnin had his own theory of magnetic phenomenon and he proclaimed that he learned how to move those stones by decoding the Egyptian pyramid builder's secret. We have evidence that the improbable movement of the enormous weight of stones have been made by observing his magnificent coral castle. And here is a person who has actually proclaimed that he learned the secret of how to achieve it in terms of physical and scientific means.

Obviously we have an amazing scientific mystery to solve here. It is easy to dismiss the whole incident as a nonsensical absurdity. It is entirely up to the individual scientist's choice to take the story as a serious challenge for scientific investigation or to dismiss it as an uninteresting and improbable nonsense.

I decided to choose to take the story as a serious challenge as a physicist and to make an attempt to solve the mystery. Looking back, it was not like serendipity or a sudden realization of the key secrets. It was rather a gradual step by step process of discovering the secrets while reading his writings and trying to piece together the entire picture of the circumstances in relation to other adventures that I have made on the nature of the neutrinos as the background particles in the universe.
Available ebook formats: epub mobi pdf lrf pdb txt html
First 20% Sample: mobi (Kindle) lrf pdb Online Reader
Price: $12.99 USD
Buy Add to Library Give as a Gift
How gifting works
Create Widget
Tags: cosmology antigravity neutrinos coral castle capacitor anomaly dipole gravity elementary particle physics free energy device jets from the blackhole lensethirring force
About Eue Jin Jeong

In 1980, graduated Yon Sei University with BS degree in Physics
In 1984, graduated University of Michigan Ann Arbor with MS in Physics
In 1989, graduated from the UT Austin with PhD degree in physics
In 1996, published the paper “Anomalous Center of Mass Shift; Gravitational Dipole Moment” at LLNL archive
In 1997, published the paper “Neutrinos Must be Tachyons” at the LLNL archive.
In July 1999, the original paper on dipole gravity showing the derivation of Lense-Thirring force was published at the Swedish journal Physica Scripta.
Aug 4th 2009, published the detailed Physical Theory of Electromagnetic Free Energy Device at the YouTube channel.
Nov-11th-2012, original document Trojan Horse Cancer Treatment Protocol Published in the Dipole Gravity Web Blog
October 31st 2015, the book describing the entire discoveries on the subjects in physics published at the Smashwords
May 24th 2016, the book "The Anatomy and the Ultimate Cure of Cancer" published at the Smashwords

You have subscribed to alerts for Eue Jin Jeong.

You have been added to Eue Jin Jeong's favorite list.

You can also sign-up to receive email notifications whenever Eue Jin Jeong releases a new book.