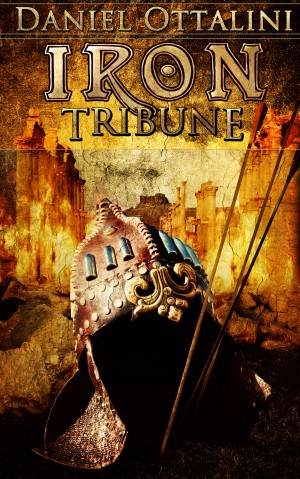 By Daniel Ottalini
Rome’s legions march ever onward in Book 3 of the Steam Empire Chronicles. Constantine Tiberius Appius leads his battle weary men from Rome to the edges of the Empire to face the ever growing Mongol menace. As their leaders squabble behind them, the men of the Germania XIII have no choice. They must defeat the Mongols and their new weapons or die trying in IRON TRIBUNE. More
Vengeance was delivered, and Rome was triumphant. At least, that's what the men of the XIII Germania believe. But their commanding officer knows better. Constantine Tiberius Appius defeated the Nortlanders in their capital, but now faces a greater challenge: the overwhelming power of the Mongol Empire. While his allies in Rome struggle to gather support for the weakened Roman army, his enemies plot. In a surprise assault, the Mongols push through the eastern provinces, leaving death and destruction in their wake. Outnumbered and outmaneuvered, Constantine and his men forge new partnerships and undertake a risky gambit. Can they turn back the unending waves of Mongol men? Or will the east be lost? Find out in IRON TRIBUNE.
Available ebook formats: epub
Price: $2.99 USD
Buy Add to Library Give as a Gift
How gifting works
Create Widget
Tags: steampunk alternate history roman battles airship mongols airship air battle roman army fiction steam empire intrigue and murder
About Daniel Ottalini

Daniel Ottalini is a teacher, writer, and amateur historian. His interests include reading everything from nonfiction to sci-fi and amazing others with his knowledge of random facts. When not working, he is most likely writing some more or catching much needed rest. He lives in Maryland.

You have subscribed to alerts for Daniel Ottalini.

You have been added to Daniel Ottalini's favorite list.

You can also sign-up to receive email notifications whenever Daniel Ottalini releases a new book.