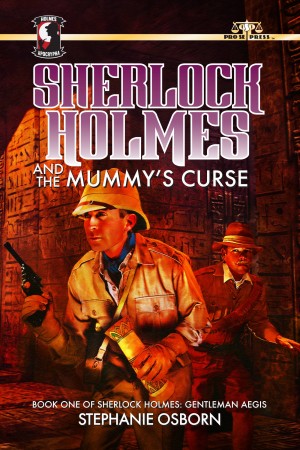 Sherlock Holmes and the Mummy's Curse

By Stephanie Osborn
In the first year of Holmes and Watson's friendship, Professor Willingham Whitesell appeals to Holmes’ unusual skill set with a request: come to Egypt at once to translate hieroglyphics for his prestigious archaeological dig. In the wilds of the Egyptian desert, plagued by heat, dust, drought and cobras, the team hopes to find the very first Pharaoh. Instead, they find something very different... More
Holmes and Watson. Two names forever linked by mystery and danger from the beginning.

Within the first year of their friendship and while both are young men, Holmes and Watson are still finding their way in the world, with all the troubles that such young men usually have: Financial straits, troubles of the female persuasion, hazings, misunderstandings between friends, and more. Watson’s Afghan wounds are still tender, his health not yet fully recovered, and there can be no consideration of his beginning a new practice as yet. Holmes, in his turn, is still struggling to found the new profession of consulting detective. Not yet truly established in London, let alone with the reputations they will one day possess, they are between cases and at loose ends when Holmes' old professor of archaeology contacts him.

Professor Willingham Whitesell makes an appeal to Holmes’ unusual skill set and a request. Holmes is to bring Watson to serve as the dig team’s physician and come to Egypt at once to translate hieroglyphics for his prestigious archaeological dig. There in the wilds of the Egyptian desert, plagued by heat, dust, drought and cobras, the team hopes to find the very first Pharaoh. Instead, they find something very different...

Stephanie Osborn is a former payload flight controller, a veteran of over twenty years of working in the civilian space program, as well as
various military space defense programs. She has worked on numerous Space Shuttle flights and the International Space Station, and counts the
training of astronauts on her resumé. Of those astronauts she trained, one was Kalpana Chawla, a member of the crew lost in the Columbia disaster.

She holds graduate and undergraduate degrees in four sciences: Astronomy, Physics, Chemistry, and Mathematics, and she is “fluent” in several more, including Geology and Anatomy. She obtained her various degrees from Austin Peay State University in Clarksville, TN and Vanderbilt University in Nashville, TN.

Stephanie is currently retired from space work. She now happily “passes it forward,” teaching math and science via numerous media including radio, podcasting, and public speaking, as well as working with SIGMA, the science fiction think tank, while writing science fiction mysteries
based on her knowledge, experience, and travels.

Reviews of Sherlock Holmes and the Mummy's Curse by Stephanie Osborn

You have subscribed to alerts for Stephanie Osborn.

You have been added to Stephanie Osborn's favorite list.

You can also sign-up to receive email notifications whenever Stephanie Osborn releases a new book.