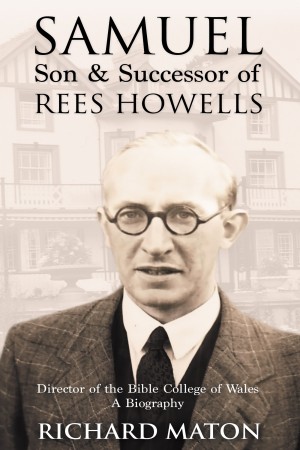 Samuel, Son and Successor of Rees Howells: Director of the Bible College of Wales - A Biography

In 1950, Samuel became Director of BCW when his father Rees Howells was taken into glory and he led the work for the next fifty-two years; living a life of faith and intercession. Samuel lived through a time of tumultuous change in the world, and oversaw the work of the Bible College and Emmanuel Grammar School as it sailed through six challenging decades. This biography remains as a historical record of the life of a great man of God, Samuel Rees Howells, the Director of BCW, its four estates, school, and its worldwide ministry.

Richard A. Maton worked with Samuel Rees Howells for forty-seven years at the Bible College of Wales (BCW). He provides readers with a firsthand account of Samuel’s life and the inner workings of BCW, with its staff and friends, in his two biographies of Samuel, son of Rees Howells.

Richard was converted under the preaching of Dr. Martyn Lloyd-Jones and was called to the Bible College of Wales in 1956 after hearing Leonard Ravenhill preaching at BCW. He has served in various roles as teacher (Emmanuel Grammar School), lecturer, dean, trustee and Principal of the College and worked closely alongside Samuel for more than twenty years. Richard is married to Kristine.

Kristine Maton joined the College family in 1936, when her parents sold all to work when Rees Howells was the Director. She grew-up at the College during the war years, and later joined the School staff, taking various roles including becoming Head Teacher. Kristine has laboured extensively with her husband Richard on this book, providing valuable insights, including personal memories from the prayers of Rees Howells, to the many decades of the ministry of Samuel Howells.

Learn more about Richard A. Maton

You have subscribed to alerts for Richard A. Maton.

You have been added to Richard A. Maton's favorite list.

You can also sign-up to receive email notifications whenever Richard A. Maton releases a new book.