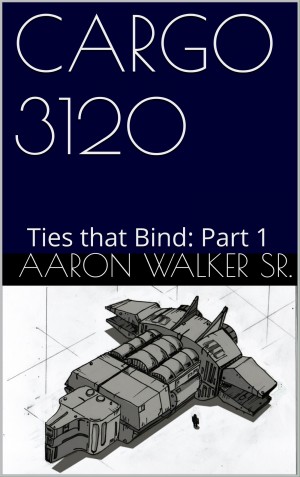 By Aaron Walker, Sr
Rated 5.00/5 based on 1 reviews
On a distant moon called Titan, Marcus and his elite team of mercenaries face their greatest threat, forcing Marcus to make a painful choice in… More
Ties that Bind Part 1

After serving in the United States Army, Aaron Walker Sr. attended Westwood College where he graduated with honors, receiving a Bachelor of Science degree in Game Software Development. Having aspirations of becoming a television writer, Aaron also learned the art of screenwriting from Emmy nominated writer, producer and Science Fiction guru: Larry Brody (Star Trek TNG, Star Trek Voyager, HBO’s Spawn the Animated Series). Aaron’s first teleplay: CARGO (upon which the novella: Cargo 3120 Ties that Bind Part 1 is based), placed as a finalist in the TVWriter.net 2012 People’s Pilot competition. The following year the pilot episode of Cargo would once again, along with Episode 2 (co-written with Daymond C. Roman) place as finalists in the 2013 People’s Pilot competition. With the positive reception of the series concept, the decision was made to tell the story of Cargo in other mediums, starting with a series of novellas. Having been a fan of Science Fiction his entire life, Aaron hopes to one day make his mark on the genre.

Aside from writing, Aaron is (first and foremost) a devoted Christian and family man. He also enjoys all things science fiction: Books, Television, Video Games, and Movies. He works in Information Technology and lives in California.

I was engulfed from start to finish! There was a little bit of sluggishness along the way, but the author restored the exciting pace of the story quickly. I wasn’t dumbfounded by any outlandish technical babble, so I didn’t have to scratch my head or reach for a science manual while reading.

And even though it is a very short read, I was thoroughly engaged with each character.

The synopsis gives me the idea that the main protagonist picks his life up after 10 years of incarceration, but I am expectantly wanting to know what takes place right after their doomed mission in part 1!

You have subscribed to alerts for Aaron Walker, Sr.

You have been added to Aaron Walker, Sr's favorite list.

You can also sign-up to receive email notifications whenever Aaron Walker, Sr releases a new book.