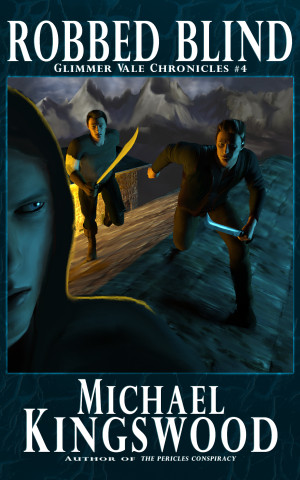 Fortunately, the Constables have assistance in the form of a team of Royal Marshalls, in town for a prisoner transfer. But they have an agenda of their own, and Raedrick and Julian must tread carefully to avoid revealing the secret of their own past. With few leads and little time, the Constables will need to use all of their skill and wit to solve the case and save their adopted home from ruin.
Available ebook formats: epub mobi pdf rtf lrf pdb txt html
First 20% Sample: mobi (Kindle) lrf pdb Online Reader
Price: $4.99 USD
Buy Add to Library Give as a Gift
How gifting works
Create Widget
Tags: crime action magic theft sword and sorcery wizards action adventure heist fantasy western
About Michael Kingswood

Michael Kingswood has written numerous science fiction and fantasy stories, including The Pericles Conspiracy, The Glimmer Vale Chronicles, and the Dawn of Enlightenment series. His interest in scifi/fantasy came at an early age: he first saw Star Wars in the theater when he was three and grew up on Star Trek in syndication. The Hobbit was among the first books he recalls reading.

Recognizing with sadness that the odds of his making it into outer space were relatively slim, after completing his bachelors degree in Mechanical Engineering from Boston University, he did the next best thing - he entered the US Navy as a submarine officer. Almost seventeen years later, he continues to serve on active duty and has earned graduation degrees in Engineering Management and Business Administration. Fitting with his service onboard Fast Attack submarines (SSNs), he does his writing on Saturdays, Sundays, and at Night.

He is married to a lovely lady from Maine. They have four children, and live wherever the Navy deems to send them.

Sign up to receive email announcements of Michael's new releases and other exclusive deals for newsletter subscribers here: http://eepurl.com/eND22 .

You have subscribed to alerts for Michael Kingswood.

You have been added to Michael Kingswood's favorite list.

You can also sign-up to receive email notifications whenever Michael Kingswood releases a new book.