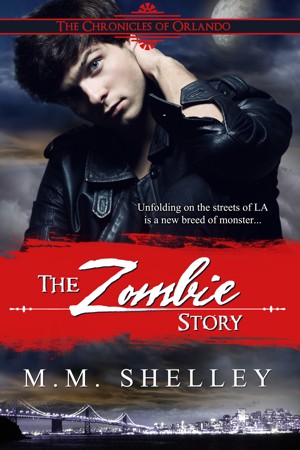 The Zombie Story The Chronicles of Orlando

By M.M. Shelley
Rated 3.25/5 based on 4 reviews
Unfolding on the streets of Los Angeles is a new breed of monster...

Orlando, fresh from the mid west, arrives at his new high school on his Harley Davidson.

All he wants is to make it through the day, and begin his training as a Zombie Hunter.

But someone has different plans for him.

The Zombie Story is the first novella in a young adult series.

M. M. Shelley lives in Los Angeles, California where she daydreams about fairies and writes fantasy and Sci-fi for the young at heart. Other than writing M. M. Shelley enjoys photography, Graphic Design and spoiling her ten nieces and nephews who are always an inspiration.

You can visit M. M. Shelley at
www.mmshelley.com

Also in Series: Chronicles of Orlando 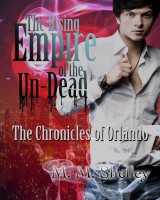 I'm reviewing these two books together as they are novellas that are part of a series.

I jumped at the chance to read this series of novellas, because I am beginning to be a big zombie lover. I like the idea of this series, in that it revolves around magick, zombies and a lot of unknowns.

Orlando seems like a good kid and he even tries to do the responsible thing in each situation. Ruben is the least predictable of the group and also the most uncompromising – he is very stubborn. Elodie is magick personified in the first book and I kind of like that she could possibly be a love interest for Orlando. And the one character that I am actually really wanting to learn more about the mysterious Cora from Dead Relatives.

I do like that this zombie story is not set in a dystopian society or post-apocalyptic world, but an everyday life, where most people do not even know that zombies exist yet. Oh and I guess the bit about magick kinda of adds some interest – everyone is born with magick (Novices, Mercurials and Wizards), some stronger than others.

It's a great adventure tale, but for some reason I was having a hard time enjoying parts of the story. I am thinking that perhaps this might have been best if it were written as one longer novel instead of a few novellas. Since I already had the second installment for the series, it wasn't as distracting for me, because I was able to continue the story right away. Though, that being said, I felt the way that first novella ended and novella started, they could have been a lot more fluid. It felt kind of abrupt to me.

Overall an interesting take on zombies and the people trying to survive the infection/attack.

*** 3 1/2 Stars ***
This novella is based on earth; an earth were everyone has the potential to possess magick. At some point, each person is tested to see their level and we start this novella knowing that Orlando has yet to undergo said testing.

When Orlando is forced to move from Oklahoma to Los Angeles with his family, he has no problem exuding his irritation. Then, not 24 hours after moving into their new house, Orlando sees a man get shot out in the middle of the road in front of his house. No one sees it, no one hears it, and there is no body or proof that the event occurred and his mom automatically accuses him of making trouble since she knows he didn't want to move there in the first place.

Then, at the hands of his grandfather, Orlando is shoved into the world of zombie hunting. He is introduced to his grandfather's old friend, Maxwell, a zombie hunter. Orlando is introduced to another hunter, Ruben, who commences with the training of Orlando. Orlando later learns of treachery in Los Angeles at the hands of one of his newly found friends. Can Orlando end the zombie invasion, protect his family, and find the traitor in time?

The concept of this novel is creative and different. The story line mostly flowed well and was easy to follow. Unlike my complaints with most novellas, this book didn't seem rushed. There wasn't a ton of information crammed into less than 100 pages of dialogue. There were twists and turns and questions about who the good and bad guys really were which kept the pages turning. I did have a problem with some of the dialogue being choppy, uneven, and sometimes even forced sounding. Some of the conversations just didn't carry on smoothly and seemed uncomfortable. I recommend this to young adults who probably wouldn't have a problem with the dialogue.

I will continue to read the series because I really like the storyline!

(Book provided at no cost in exchange for an honest review)

I enjoyed reading this book for various reasons:
it had zombies in it!
it was YA but there were no love triangles or romance in it!
the whole zombies evolving idea was good and may turn into something even better in the next book!
However:
there were some misspelled words here and there.
the events in the story don't gel together.
I think this would be a good book for any young readers who are just beginning to learn how cool zombies are!

If you get a chance read this book. Its really good.

You have subscribed to alerts for M.M. Shelley.

You have been added to M.M. Shelley's favorite list.

You can also sign-up to receive email notifications whenever M.M. Shelley releases a new book.