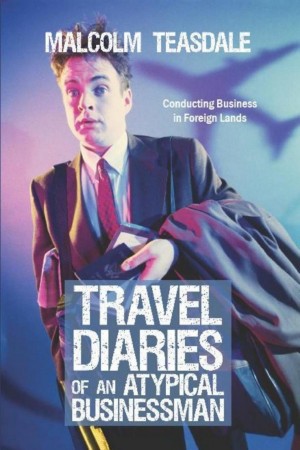 Travel Diaries of an Atypical Businessman

By Malcolm Teasdale
This book is about Global Business travel, and details the challenges and difficulties adjusting to foreign cultures. You can’t help but laugh at these stories, as Malcolm Teasdale tries his best to convince business folk from around the World in such areas as Latin America, Asia Pacific, South Africa, and Europe to sell his Company’s products. Misinterpretation and misunderstandings abound. More
This book is a collection of real-life experiences from a successful entrepreneur who traveled to over 60 countries either for business or pleasure during a seventeen year period.
Seasoned traveler Malcolm Teasdale shares his tribulations and lessons learned as he conducted business in foreign lands as a technical and sales professional in the telecommunications industry.
Malcolm offers highlights from many of his trips overseas to countries with such vast cultural diversity as: China, Switzerland, Russia, Belize, Argentina, Iceland, Peru, as well as many others. As he faced the challenges of understanding different languages, dialects, and accents, Malcolm was also learning how to deal with the chaos of airline travel, the uncertainty surrounding a business partnership in India, and the successful navigation through rush hour in Japan.
A list of Malcolm’s favorite and not-so-favorite locations in the world is included with his votes for the most boring place, worst organized traffic, countries with the greatest language barriers and best golf courses. Malcolm details his sometimes frustrating, often humorous experiences as he explored foreign lands in this fascinating
Journal sure to appeal to any kind of traveler. Malcolm Teasdale grew up and was educated in Coventry, England. As an entrepreneur, he has traveled extensively around the World in order to sell technology and has also spoken at several telecommunications industry events. He currently resides in the United States, but has also lived in Wales, Canada, and Singapore.
Available ebook formats: epub mobi pdf rtf lrf pdb txt html
First 20% Sample: epub mobi (Kindle) lrf more Online Reader
pdb
Price: $5.95 USD
Buy Add to Library Give as a Gift
How gifting works
Create Widget
Tags: travel international travel travel essays travel business humor humour
About Malcolm Teasdale

Malcolm Teasdale was born in Coventry, England and is a successful entrepreneur who now spends his time traveling to “off-the-beaten-track” places. Spending all of his working life in the technology industry, he has made a success from creating two software development companies, the most recent of which he started in 1998 and sold to a major corporation in 2013. He created markets in all the major continents, and sold products to 8,000 + customers in over 70 countries. His company received numerous industry awards for product quality, innovation, and pioneering technology, and he has spoken at many industry events. He has traveled to over 60 countries for business and leisure, but since retiring from the industry, now travels to the more unusual destinations in the World in search of rich cultural experiences, His 3rd travel book has just been published called, “The Midlife Crisis Continues” which is about ignoring age and seeking out adventures. Think Bhutan. His previous two books “Travel Diaries of an Atypical Businessman” and “Asia Specific” focused on the quirky side of travel and the challenge of expanding his company’s reach in Asia Pacific by living in the region during periods in 2007 and 2008.
Whether it be trekking in the Himalayas or diving with Whale Sharks, there is always a new adventure to be had, and as long as he is physically and mentally able, the story will continue.
Having also lived in Canada and Singapore, he now resides in Florida.

Reviews of Travel Diaries of an Atypical Businessman by Malcolm Teasdale

You have subscribed to Smashwords Alerts new release notifications for Malcolm Teasdale.

You have been added to Malcolm Teasdale's favorite list.

You can also sign-up to receive email notifications whenever Malcolm Teasdale releases a new book.