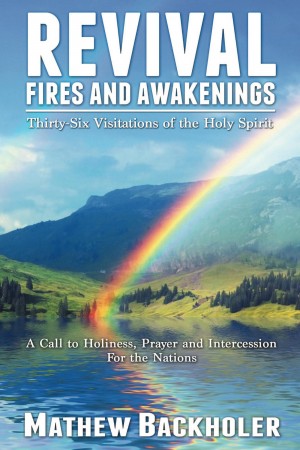 Revival Fires and Awakenings, Thirty-Six Visitations of the Holy Spirit - A Call to Holiness, Prayer and Intercession for the Nations

The book covers: Revivals in Scripture, understanding revivals and awakenings, the characteristics of revival, why revival is needed, how to see revival, prayer for revival, opposition and why revivals cease, visions and prophecies of revival for the United Kingdom and beyond, our responsibility, repentance, personal holiness and intercession for the nations. Revival Fires and Awakenings looks at the twenty-eight revivals from the Holy Bible and features thirty-six of the most powerful revivals and awakenings from world history as well as little known and obscure visitations of the Holy Spirit.

The 36 accounts of revivals include: The American and British Great Awakenings of the eighteen century, the revivals of 1857-1860 in America, Ireland, Scotland, Wales and England; the 1904 Welsh Revival, Azusa Street Outpouring; Congo, Korean, Indonesian, Hebridean, Pensacola and Argentinean Revivals and includes visitations of the Holy Spirit in Kilsyth, Dundee, Cornwall, East Anglia, North Uist, Ghana (and other West African countries), China, Japan, Manchuria, New Zealand and many other places with references to dozens of other revivals and incredible evangelistic campaign, healing crusades and television evangelism from the twentieth century and into the twenty-first.

Throughout the book there is a watermark and undercurrent of the influences of the British Awakening (1739-1791) and the Welsh Revival (1904-1905) and how Christians were stirred and encouraged by past visitations of the Holy Spirit; or encouraged and inspired by the lives of revivalists, to see the blessing of revival in their own town or nation. Read about the prayer and intercession of surrendered vessels which allowed the heavens to be rent and the floods to be poured forth so that Jesus could be lifted up, drawing men unto Himself during times of Divine refreshing. Learn from the past, be challenged for today and be inspired for the future!

Reviews of Revival Fires and Awakenings, Thirty-Six Visitations of the Holy Spirit - A Call to Holiness, Prayer and Intercession for the Nations by Mathew Backholer

You have subscribed to alerts for Mathew Backholer.