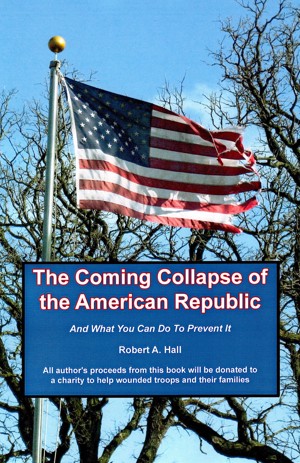 The Coming Collapse of the American Republic

Robert A. Hall has been a successful non-profit executive since 1982. Prior to entering that field, Hall served five terms in the Massachusetts State Senate. He was first elected in 1972, the year he graduated from college, defeating a Democrat incumbent by nine votes out of 60,000 cast, in a 4-1 Democrat district, last won by a Republican in 1938. He was re-elected four times by increasing margins, carrying every city and town in the district, and was nominated by both parties in 1976. He was Minority Whip when he retired undefeated in 1982.

Hall holds an associate’s degree in liberal arts from Mount Wachusett Community College (1970), a Bachelor’s degree in government from the University of Massachusetts (1972) and a Master’s of Education degree in history from Fitchburg State University (1980).

He is also a Marine Vietnam veteran, having served four years in the regulars before college and, while a senator, another six in the reserves, finishing with the rank of Staff Sergeant.

A frequently-published freelance writer, Hall’s columns, articles, short stories and poetry have appeared in over 75 local and national publications. His book of anecdotes about the Marines and politics, The Good Bits, was published by www.authorhouse.com in 2005. His book on association management, Chaos for Breakfast: Practical Help and Humor for the Non-profit Executive was published in 2008 by the American Society of Association Executives, www.asaecenter.org. (Royalties go to charity.) CYA: Protecting Yourself in the Modern Jungle, a humor/self-help book was produced by PublishAmerica in 2010. www.publishamerica.net/product93291.html

He has been married to his first wife, Bonnie, since 1992. Currently he manages an association, reads extensively and writes articles for his political blog, The Old Jarhead. (www.tartanmarine.blogspot/com). He is a former Scottish Country Dancer, but has Pulmonary Fibrosis, an eventually-terminal illness that curtails his physical activities as he requires oxygen for mobility. Comments, fan letters and hate mail, which he enjoys sharing, may be sent to him at tartanmarine@gmail.com.

You have subscribed to alerts for Robert Hall.

You have been added to Robert Hall's favorite list.

You can also sign-up to receive email notifications whenever Robert Hall releases a new book.