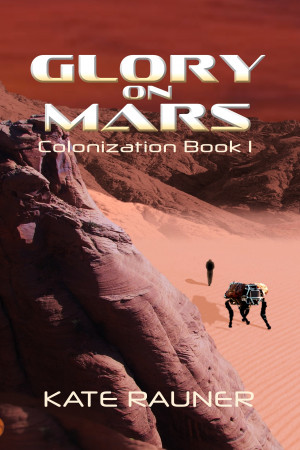 By Kate Rauner
Rated 5.00/5 based on 1 reviews
Something is terribly wrong on Mars. The colony's psychologist just walked out an airlock to her death, but that doesn't stop roboticist Emma Winters. She leaves Earth forever.

A strange sickness cripples the colonists' efforts. Emma must discover the truth before the planet's lethal surface kills them all. Emma planned to be one of the first humans on Mars. Now she may be one of the last More
Something is terribly wrong on Mars.

The colony's psychologist just walked out an airlock to her death, but that doesn't stop roboticist Emma Winters. She leaves Earth forever for cold stone bays on the vast Tharsis Plain.

Settlers who greet her are oddly hostile, and despite an advanced squad of construction bots, a strange sickness cripples their efforts to build a livable habitat. Plagued by deadly accidents, she must discover the truth before the planet's lethal surface will kill them all.

Emma planned to explore in her robotic walkabout, to be one of the first triumphant humans on Mars. Now she may be one of the last.

Read the series! Check out the value priced Box Set, Colony on Mars.

I write science fiction novels and science-inspired poetry, and serve as a volunteer firefighter. I'm also a retired environmental engineer and Cold War Warrior (honestly, that's what Congress called us) because I worked in America's nuclear weapons complex. Now living on the edge of the southwest's Gila National Forest with my husband, cats, llamas, and dog, I'm well on my way to achieving my life-goal of becoming an eccentric old woman.

Near-Future Mars Colony
Join Emma on her one-way journey to Mars, and see what real readers say about the story.

About the Series: On Mars

A one-way journey to Mars may be a mistake. Discover how the first settlers survive and build a colony on the Red Planet.

Also in Series: On Mars

Review
Elizabeth Randolph reviewed on on Oct. 2, 2017
(no rating)
Kate Rauner's hard science fiction book set on Mars has believable and understandable science and technology. Her descriptions are easy to follow for someone like me who is not scientifically savvy. I compared her book with The Martian. While both are realistic portrayals of possible life and problems on Mars, the problems in The Martian became predictable. As I read the Martian, I would say to myself, OK, now it's time for another breakdown. In Glory on Mars, there is a greater variety of scenarios, keeping my interest the whole way through. Considering all the technical stuff in it, that's saying a lot. I can see that the series continues. That's good.

The Story: The main story centers centers Emma, a scientist and robotics expert who is part os a staged colonization of Mars. Much of the book is a description of the problems involved in setting up a self-sufficient colony in terms of heat, power, shelter, transportation and food, as well as planning for population expansion. It is the hope that the colony will provide a stepping stone to the rest of the solar system, and space in general.
Several sub-plots involve dangers faced by the colonists because of human criminal interference and natural disaster, as well as some minor relationship conflicts.

Technical: The book is well constructed with very few technical problems, largely occasional typographical errors which were quite rare. There was nothing here to distract the reader. On rare occasion, attribution of dialog was ambiguous. Nevertheless, the dialog was realistic, often a difficult accomplishment for any author.
There were some interesting internal links to media, poetry, explanations of material in the book that was not necessary to the flow of the book and so left ‘optional.

Style. This is Hard Science Fiction, not Fantasy, and the author has taken pains to discuss various problems facing the colonists with reference to real science, planetology, atmospheric conditions. Nowhere did I find any magic or fantasy, but every unusual and interesting feature, and many are described, appears to be based in science.
Ms. Rauner is a retired engineer with experience in America’s nuclear complex. She demonstrates authority in the science context of her writing.
The description of problems in colony development is fascinating, although may cater to a certain segment of audience with a background and interest. It does not require extensive education in science, but it certainly requires interest.
If the book falls down at all, it will be in the eyes of the beholder, that character and relationship development takes a back seat to the world ‘building,’ really world ‘description,’ because Ms. Rauner tries very hard to remain true to reality.
And I missed the opportunity to name the cat ‘Glory’, but to my knowledge, the cat was never named.

Speculative Medicine. https://drbriandingle.wordpress.com This, of course, is my interest, and one of the reasons for reviewing this book. There are references to the realistic risk of radiation damage because of lack of geomagnetic fields and atmosphere on Mars, particularly during solar flares.
“Cancer wasn’t much of a problem on Earth anymore,” is a quote from one of her appendices and Emma relies on this knowledge, although never has to apply it during the story. Nanoparticles which grip each malignant cell individually (targeted therapy?), that help to discover single cells in the human body and irradiate them using radio frequency ablation (Kanzius effect) is not so far-fetched as you might think, given that current science is investigating detection of circulating cancer cells and single cell imaging, and bulk (although not single cell) radio frequency ablation is a well-established currently.
Of course, we already have targeted therapy such as cell-lethal medications linked biochemically to monoclonal antibodies (magic bullets) which attack individual cells, so this too is not so far-fetched.

I enjoyed this book very much. I was reminded often of Kim Stanley Robinson and his Mars series, which I mean as a compliment in the best possible way.
I would give this book 4.6

You have subscribed to alerts for Kate Rauner.

You have been added to Kate Rauner's favorite list.

You can also sign-up to receive email notifications whenever Kate Rauner releases a new book.