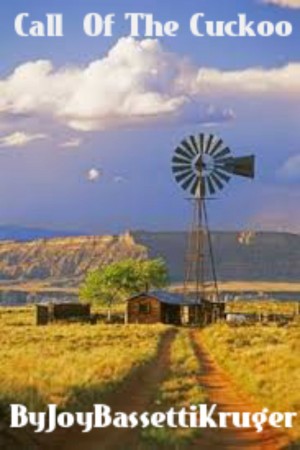 Call Of The Cuckoo

By Joy Bassetti-Kruger
-No, Gogo, the bird does not say Piet-my-vrou-Piet-my-vrou when it calls, but rather Christmas box-Christmas box.
Lorna recalled this simple phrase that that Mary had once said as a child and later she packed a treasure box for her and got Alex to hide it in a cave on the farm, until such time as her will was read and Mary had inherited the farm. More
Call Of The Cuckoo is a story about the changing times of a South African farm over several generations. The title was decided upon due to a special gift for a young woman that was hidden in in a box inside a cave, near to the place where a Cuckoo had always nested, -especially since she'd always insisted that the bird's call said -Christmas box -Christmas box.
Lorna, the owner of the farm, had lived there for her entire life, but now that she was getting older, she decided to change her will in favour of a young woman that she has watched growing up. She knew this decision would not be popular with her family, so this was why the truth only came out when the will was read and it was too late for any changes to be made.
To discover how the Christmas box was eventually found, you will first have to read about the entangled lives of this unusual family. For some of them had rather sinister ulterior motives for hanging onto the farm, which they perceived as their inheritance...
Available ebook formats: epub mobi pdf rtf lrf pdb txt html
First 20% Sample: epub mobi (Kindle) lrf more Online Reader
pdb
Price: $2.99 USD
Buy Add to Library Give as a Gift
How gifting works
Create Widget
Tags: ownership transition discovering the truth difficult decisions changing her will changing ownership deciding to hide a gift discovering the cave jacks ulterior motive keeping decision a secret not telling the family
About Joy Bassetti-Kruger

I began my library career at the Jhb. public library, and while I worked there part time, I also completed my Library Exams with the SALA. Then I was headhunted by Ekom, as I'd specialized in information retrieval and they needed someone to obtain current information on various projects for their engineers. Later I moved to Control Data, where I learned all about storing such information on their large computers.
All the while, I also taught ballet, modern and Spanish, dancing in my spare time, as I'd trained as a dance teacher while still at school. After I married I ran two dancing studios for adults, where I also began to teach yoga and passive exercises. In my youth I danced for PACT for a while, but as I was still studying at the time, -I decided to give this up, although I continued to dance in various productions at the Civic Theater in Johannesburg. -Showboat, The Merry Widow, Guys and Dolls, to name a few.
As I'd also joined two writing circles previously, I'd been writing all along, - mostly short stories. But then an opportunity came up for me to include English Literature and Creative Writing in my studies, so this is when my writing career really took off, even though I never published anything until recently, when I first uploaded stories on a local SA site,then Kindle, Kobo and now finally that I've cracked the 'meat-gringer," I've loaded some new stories on to Smashwords, which I think is a really wonderful site for writers, as it forces us to confront all the issues and make certain that everything is correct..

Reviews of Call Of The Cuckoo by Joy Bassetti-Kruger

You have subscribed to alerts for Joy Bassetti-Kruger.

You have been added to Joy Bassetti-Kruger's favorite list.

You can also sign-up to receive email notifications whenever Joy Bassetti-Kruger releases a new book.