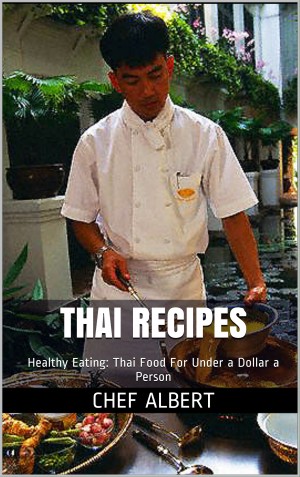 Thai Recipes: Healthy Eating: Thai Food For Under a Dollar a Person

Prepare
In a bowl, combine cornstarch and water until smooth. Stir in peanut butter and three tablespoons soy sauce and set aside.

In a large pan or wok, stir-fry the beef, pepper and remaining soy sauce in oil until meat is no longer pink. Remove and keep warm. Add the peppers, bamboo shoots, carrot and pepper flakes and stir-fry for three minutes or until soft. Add garlic; cook for one more minute.

Albert Jack is a writer and historian. His first book Red Herrings and White Elephants explored the origins of well-known idioms and phrases and became an international best-seller in 2004. It was serialized in the Sunday Times and remained on their best-seller list for sixteen straight months. He followed this up with a series of other popular titles including Shaggy Dogs and Black Sheep, Pop Goes the Weasel, What Caesar did for my Salad & They Laughed at Galileo.

Fascinated by discovering the truth behind the world's great stories, Albert has become an expert at explaining the unexplained, enriching millions of dinner table conversations and ending bar room quarrels the world over. He is now a veteran of hundreds of live television shows and thousands of radio programs worldwide. Albert lives somewhere between Guildford in England and Bangkok in Thailand.

OTHER BOOKS BY ALBERT JACK
javascript:void(0)
Red Herrings and White Elephants
Shaggy Dogs and Black Sheep
Phantom Hitchhikers
Loch Ness Monsters and Other World Mysteries
Pop Goes the Weasel
The Old Dock and Duck
What Caesar Did for my Salad
Black Sheep and Lame Ducks
It's a Wonderful Word
Money for Old Rope Part 1
Money for Old Rope Part 2
The Jam: Sounds From the Street
Want to be a Writer?
New World Order: The Bilderberg Conspiracy and the Last Man in London
Rose Versus Thistle
They Laughed at Galileo
The Greatest Generation - Diary of a 1st & 6th Airborne Paratrooper
9/11 Conspiracy
Debt Freedom Program
Gun Control

Reviews of Thai Recipes: Healthy Eating: Thai Food For Under a Dollar a Person by Chef Albert

You have subscribed to Smashwords Alerts new release notifications for Chef Albert.

You have been added to Chef Albert's favorite list.

You can also sign-up to receive email notifications whenever Chef Albert releases a new book.