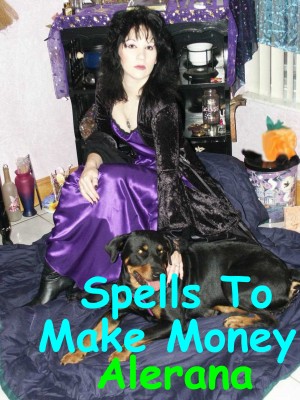 By Alerana
Ten real magic spells that will bring you money. This book was written by a true and experienced practitioner of the Craft, disti;ing a lifetime's experience of WitchCraft into her work. More
Alerana has been practicing the Craft since she was a young girl. She has made a name for herself as a great witch. A few years back she wrote a series of spell books distilling the best spells from her lifetime's experience of The Craft. We are currently republishing those books for the benefit of modern witches and for the curious spellcaster. This book, the first to be republished, and tells you how to get money using WitchCraft.

Be aware that these are REAL spells that REALLY work, if purchased this book should not be treated as a novelty but as a serious book of magic.

Also be aware that this book's power is in the strength of the spells. It is not a long book with a huge word count. It is not intended to be a "good read". What it does intend is to impart the knowledge of the old ways onto the reader, and gives you ten powerful spells that WILL bring you money. But ten spells do not take a lot of telling, so the word count for this book will be low. If you buy this book as "something to read on a long journey" you will be disappointed with it. But if you buy this book because you want money, and intend to use The Craft to get that money, then you will be very happy with this book and the results it will bring you.

Alerana has been studying WitchCraft since she was a young girl. In her teens she spent a month living naked in the woods alone, practicing The Craft all day long. On her return to civilization she continued to study with a group of witches and novices, and found that, since her skills and knowledge were by far the greatest in the group, greater even that any of the older witches in her group, she was considered the "elder" of the group, despite being one of the youngest.

Since then she has dedicated her life to The Craft, both practicing and teaching. She is often called on for help and advice by other witches, and is considered a master of The Craft

You can read a fuller biography of Alerana at:
http://magic-for-witches.info/about-a-witch.shtml

You have subscribed to alerts for Alerana.

You can also sign-up to receive email notifications whenever Alerana releases a new book.