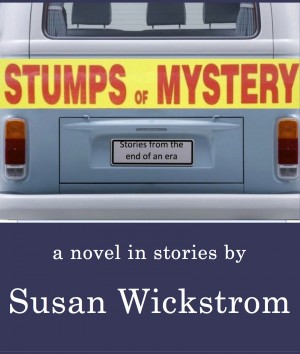 Stumps of Mystery: Stories from the End of an Era

Susan Wickstrom lives and works in Portland, Oregon. She was senior editor for the Bear Deluxe magazine and has written for Willamette Week and the Oregonian. She has worked as communications director for both a large non-profit that serves the homeless population as well as the Oregon Health Authority

Reviews of Stumps of Mystery: Stories from the End of an Era by Susan Wickstrom

This is a well written literary novel with an unconventional narrative structure, consisting of a series of linked stories about the inhabitants of a small town in Oregon called Woodhill around 2007-8. For much of the novel, each chapter takes the point of view of a particular character – such as a PR consultant who’s just moved to Woodhill from NewYork, a park ranger, a Mexican immigrant, the sister of a tree-sitting environmental activist or a 13 year old whose older big brother is fighting in Iraq. Until the last section, there is not much linking them all together. But two things keep you reading. Firstly, there are subtle links between the chapters – so watch out for them. Secondly, the characterisation is very well done and very engaging – so much so that the lack of plot didn’t bother me. It is no mean feat to take you right into a particular character’s world in just one short chapter but Susan Wickstrom manages it very effectively. And readers hungry for plot will be rewarded in the final section, which centres on a tragic event and is much more plot-driven, bringing together many of the characters and themes from earlier on.

For a longer review, see: http://paulsamael.com/blog/stumps-of-mystery

You have subscribed to alerts for Susan Wickstrom.

You have been added to Susan Wickstrom's favorite list.

You can also sign-up to receive email notifications whenever Susan Wickstrom releases a new book.