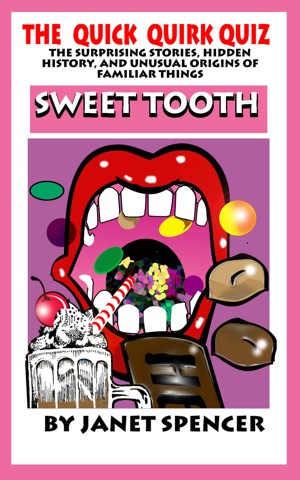 By Janet Spencer - Trivia Queen
Next time you’re hungry for something sweet, consider that behind every candy bar, there’s a story waiting to be told. These 28 tales reveal the secrets behind the invention of the candies, cakes, ice cream, and other goodies we all love to cram into our mouths. Will you be able to guess which dessert is under discussion when you hear the story of its discovery?
Available ebook formats: epub mobi pdf rtf lrf pdb txt html
First 20% Sample: epub mobi (Kindle) lrf more Online Reader
pdb
Price: $0.99 USD
Buy Add to Library Give as a Gift
How gifting works
Create Widget
Tags: sweet trivia trivia quiz trivia book trivia test things that work ice cream interesting stories candy history of candy invention of ice cream invention of things
About Janet Spencer - Trivia Queen

Janet Spencer was born in 1960 to a poor white sharecropper in Illinois. At 12, she slipped aboard a southbound freighter headed for Australia, where she was further raised by a pack of wild dingoes. Naturally curious and totally obsessed with the minor details of life, she traveled to London to join the Royal Astronomical Society to learn more of the world and the universe. However, the RAS had a long-standing ban against allowing in poor white sharecroppers half raised by wild dingoes, so she instead camped outside and counting the bricks making up the snobby institution. This was a pivotal experience for her. Finding there were exactly 17,431 bricks started her on her lifelong quest for small details, amazing truths, and petty coincidences. The Trivia Queen claimed her crown!
Since then, she has been roaming the world from the Arctic to Tierra del Fuego, counting bricks, observing small insects, and measuring the average number of grains in a typical salt shaker. With such a vast storehouse of trivial knowledge, she now embarks on a new quest: to share this information with her fellow humans - stumping experts, amazing laymen, and bringing wide-eyed blank stares to all those around her. She is the author of several books including "Montana Trivia" and "Yellowstone Trivia" published by www.RiverbendPublishing.com

You have subscribed to alerts for Janet Spencer - Trivia Queen.

Would you like to favorite Janet Spencer - Trivia Queen?

You have been added to Janet Spencer - Trivia Queen's favorite list.