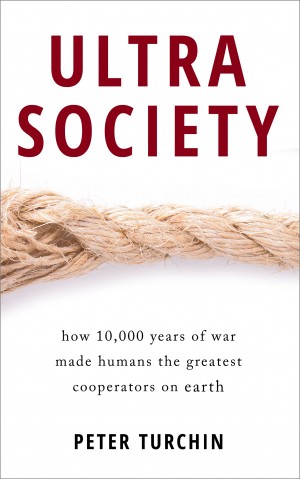 Ultrasociety: How 10,000 Years of War Made Humans the Greatest Cooperators on Earth

By Peter Turchin
Follow the evolutionary scientist Peter Turchin on an epic journey through time. From stone-age assassins to the orbiting cathedrals of the space age, from bloodthirsty god-kings to India’s first vegetarian emperor, discover the secret history of our species—and the evolutionary logic that governed it all. More
Cooperation is powerful.

There aren’t many highly cooperative species—but they nearly cover the planet. Ants alone account for a quarter of all animal matter. Yet the human capacity to work together leaves every other species standing.

We organize ourselves into communities of hundreds of millions of individuals, inhabit every continent, and send people into space. Human beings are nature’s greatest team players. And the truly astounding thing is, we only started our steep climb to the top of the rankings—overtaking wasps, bees, termites and ants—in the last 10,000 years. Genetic evolution can’t explain this anomaly. Something else is going on. How did we become the ultrasocial animal?

In his latest book, the evolutionary scientist Peter Turchin (War and Peace and War) solves the puzzle using some astonishing results in the new science of Cultural Evolution. The story of humanity, from the first scattered bands of Homo sapiens right through to the greatest empires in history, turns out to be driven by a remorseless logic. Our apparently miraculous powers of cooperation were forged in the fires of war. Only conflict, escalating in scale and severity, can explain the extraordinary shifts in human society—and society is the greatest military technology of all.

Seen through the eyes of Cultural Evolution, human history reveals a strange, paradoxical pattern. Early humans were much more egalitarian than other primates, ruthlessly eliminating any upstart who wanted to become alpha male. But if human nature favors equality, how did the blood-soaked god kings of antiquity ever manage to claim their thrones? And how, over the course of thousands of years, did they vanish from the earth, swept away by a reborn spirit of human equality? Why is the story of human justice a chronicle of millennia-long reversals? Once again, the science points to just one explanation: war created the terrible majesty of kingship, and war obliterated it.

Is endless war, then, our fate? Or might society one day evolve beyond it? There’s only one way to answer that question. Follow Turchin on an epic journey through time, and discover something that generations of historians thought impossible: the hidden laws of history itself.
Available ebook formats: epub
Price: $9.95 USD
Buy Add to Library Give as a Gift
How gifting works
Create Widget
Tags: peace violence human nature cooperation inequality egalitarianism cultural evolution
About Peter Turchin

Peter Turchin is a scientist and an author who wants to understand how human societies evolve, and why we see such a staggering degree of inequality in economic performance and effectiveness of governance among nations (see Research Interests on http://peterturchin.com/). Peter’s approach to answering these questions blends theory building with the analysis of data. He is the founder of a new transdisciplinary field of Cliodynamics, which uses the tools of complexity science and cultural evolution to study the dynamics of historical empires and modern nation-states.

Peter has published two hundred articles, including a dozen in such top journals as Nature, Science, and PNAS (see Academic Publications on http://peterturchin.com/). His publications are frequently cited and in 2004 he was desginated as “Highly Cited Researcher” by ISIHighlyCited.com. Turchin has authored six books. The most recent include Secular Cycles (with Sergey Nefedov, Princeton, 2009), War and Peace and War (Plume, 2005), and Ultrasociety (Beresta Books, 2016).

Reviews of Ultrasociety: How 10,000 Years of War Made Humans the Greatest Cooperators on Earth by Peter Turchin

You have subscribed to alerts for Peter Turchin.

You have been added to Peter Turchin's favorite list.

You can also sign-up to receive email notifications whenever Peter Turchin releases a new book.