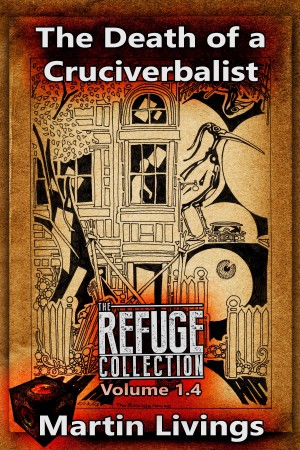 The Death of a Cruciverbalist (1.4)

By Martin Livings
Rated 4.67/5 based on 3 reviews
A keen crossword puzzler is puzzled even more by disturbing news about the crossword's creator. A tale for the armchair sleuth and anyone who is following the goings on in the strange little town of Refuge. Writer/Artist proceeds to charity. Story (C) Copyright Martin Livings 2015, art by Will Jacques.
Download: epub mobi (Kindle) pdf more Online Reader
lrf pdb
Price: Free! USD
Add to Library
Create Widget
Tags: horror suspense mystery short story weird dark fiction refugees refugees are humans
About Martin Livings

Perth-based writer Martin Livings has had over sixty short stories in a variety of magazines and anthologies. His short works have been listed in the Recommended Reading list in Year’s Best Fantasy and Horror, and have appeared in both The Year’s Best Australian SF & Fantasy, Volumes Two and Five, and Australian Dark Fantasy & Horror: 2006 and 2008 editions.

His first novel, Carnies, was originally published by Hachette Livre in 2006, and was nominated for both the Aurealis and Ditmar awards. It has now been reprinted by Cohesion Press, and is available on Smashwords for the first time. His collection of short stories, Living With the Dead, was published in in 2012 by Dark Prints Press.

Reviews of The Death of a Cruciverbalist (1.4) by Martin Livings

A fantastic story that blends puzzles and murder-mystery, recalling Fredric Brown's "Night of the Jabberwock".

An interesting approach to the mystery tale, with an unusual protagonist and an unexpectedly touching denouement! A strong addition to the Refuge Collection from Aussie horror veteran Martin Livings.

The crossword is the only decent thing in Refuge's rag of a paper, so when its architect is found dead of an apparent suicide, a lonely new resident to the town takes it upon himself to investigate. Tightly- plotted with an unexpected twist, this is a wonderful short read from one of Australia's best speculative writers. A perfect for whodunnit for crossword lovers everywhere.

You have subscribed to Smashwords Alerts new release notifications for Martin Livings.

You have been added to Martin Livings's favorite list.

You can also sign-up to receive email notifications whenever Martin Livings releases a new book.