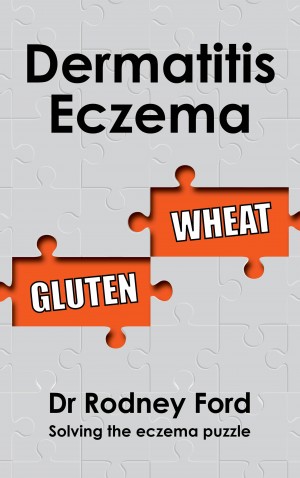 By Rodney Ford
Skin diseases are frequently caused/triggered by wheat and gluten: gluten-eczema. The evidence for this book is derived from published medical studies, patient reports and my extensive clinical experience and research into food allergy, food intolerance, and gluten-related disorders over the last 35 years. I offer you help to solve your eczema. I hope I can help you get better at last. More
In my Allergy Clinic I have found that gluten and wheat are the most common triggers of severe eczema – but this fact seems to have been completely missed by most dermatology experts. Gluten and wheat are the missing pieces of the eczema/dermatitis puzzle.

Having eczema on your face is embarrassing, uncomfortable, painful and sometimes unbearable. I see lots of children with severe facial eczema and who have been unresponsive to all of the potions and lotions: so called “dermatological failures”.

Meet Declan. His mum says, “Yes, it is fine to put him in your book. His skin is looking great. This is after being on a gluten-free diet for just two weeks!”

He is seven years old. He has been troubled with eczema for the last five years, but it has been more severe over the last two years. He has been on strong steroid creams, antibiotics, antiseptic ointments and moisturisers – but to no avail.
His eyes hurt. They are itchy and have not responded to creams.
His mouth hurts. His lips are cracked and sore. It is painful for him to smile and laugh.
The rest of his body is also badly affected – being dry, itchy and scaly.
His blood tests show that he is gluten-sensitive and has a wheat allergy.

His mother says,
“Hi Dr. Ford, I brought Declan in the see you on Tuesday in regards to his eczema and you sent us away to have blood tests etc. You thought that Declan was reacting to gluten. I have taken him off gluten and his skin is looking fantastic, face is cleared and skin just about back to normal and it has only been four days. He is a different boy, happy and sleeping through the night. Looking forward to catching up with you at our next appointment.”
Kind regards, Mellisa.

My concern is that Declan has seen many health professionals, including dermatologists, who have never even considered the possibility of a gluten/wheat disorder. There are hundreds of thousands of similar undiagnosed children in our communities, who are unnecessarily suffering, when a simple dietary change could transform them. This is the reason that I am writing this book.

* Eczema is commonly precipitated by gluten: I call this gluten-eczema.

My purpose is to raise the awareness that skin diseases are frequently caused/triggered by wheat and gluten: gluten-eczema. The evidence for this book is derived from published medical studies, patient reports and my extensive clinical experience and research into food allergy, food intolerance, and gluten-related disorders over the last 35 years. I offer you help to solve your eczema. I hope I can help you get better at last.

A mum told me this in her frustration: “These medical people seem so negative about the effects of gluten. I don’t understand how they can deny the results! It is so frustrating. I do not “choose” to have Joshua and Sam on gluten-free diets. But they are SO MUCH BETTER. There is no question that they are sensitive to gluten.”

In my Clinic I have found gluten and wheat to be the missing pieces to solving the eczema puzzle. Learn:
* How to work out your eczema triggers.
* Why skin-prick-tests can uncover wheat allergy.
* Why skin-prick tests are hopeless for diagnosing gluten-sensitivity.
* What blood tests to order. 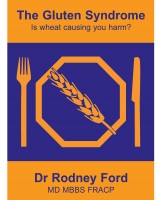