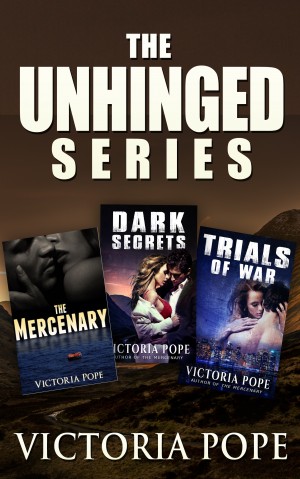 THE MERCENARY - Book One:
Benjamin Kade is not the type of man who sticks out his neck for anybody – especially not the people he’s been meeting lately. Contracted to a mysterious island for five years, he has been mandated to interrogate criminals of the worst ilk – and torture is encouraged. But when beautiful and innocent Carys Munro lands in the chair, he must face his own demons and break all the rules to save her.

DARK SECRETS - Book Two:
When Ellie Reardon and her friends flew off to Scotland for a last-minute getaway, she didn't expect it would change her life forever. Caught in the clutches of a series of unfortunate events, Ellie must rely on the help of a tall, dark stranger to keep her safe... and to find her kidnapped boyfriend. But as she spends time with her fierce protector, dark secrets about her family reveal themselves.

TRIALS OF WAR - Book Three:
Separated only by an ocean, Ellie and Troy were worlds apart. He was in the South of France, hiding out with the enigmatic Kade family, and she was rehabilitating in New York: abandoned, alone and betrayed by everyone she knew. When fate put her back in his care she was faced with the reality that her family's treachery ran deep, and the feelings she had for Troy could outlast even death itself.

Victoria Pope is an up-and-coming romance author. She has worn many hats in her day (including but not limited to: makeup artist, film buff, data entry clerk, hardware store girl) – but she has always loved to entertain people. Whether it be her silly SNL impressions or her multitude of (probably) terrible accents, she loves to make people laugh. But the one thing that everyone knows about her is her dirty mind, and her love of all things romance.

Her first book, The Mercenary (released December 2013) is an escape-to-survive romantic thriller that sets the tone for its full throttle sequel, Dark Secrets which will be released September 30, 2014.

You have subscribed to alerts for Victoria Pope.

You have been added to Victoria Pope's favorite list.

You can also sign-up to receive email notifications whenever Victoria Pope releases a new book.