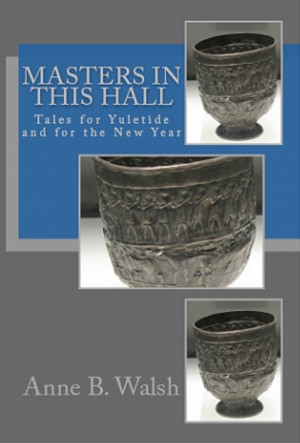 Masters in This Hall

Sun and Moon and Stars of Light: Amanda Evans believes she escaped her homeworld six months ago, married to her beloved Dai. Her grandparents say Dai was killed in an explosion eight months ago. Who knows the truth? Only the Aelur players of the starship "Wild Rover", and their answer will leave everyone wondering where story ends and reality begins...

The Christmas Cat: Edwin and Anthea Marlowe tell their children a tale about a little cat who did not know what to give the baby Jesus, but ended up giving the best gifts of all.

Reviews of Masters in This Hall by Anne B. Walsh

One good, one brilliant, one that varies. In that order. As with many of the other Christmas collections, the story worth buying the book for is the story set in the Killdeer universe. But that one's second, so we'll leave it for now.

The good story is The Christmas Cat, which is - well, most of it is a story about the birth of Jesus and the cat that couldn't decide what gift to give. The tale itself is entertaining. Put talking animals in a story (without making them into humans wearing a little faux fur) and that's me at least partially sold. It didn't hurt that the cat had a sweet nature (I love cats too). And the message to serve in whatever way we can was earned by the events. But I think the frame - the Glenscar bit - either needed to be at the start AND the end, or not have been there at all. Preferably the first, as it WAS well-written and interesting. But as it stands it's not really relevant to the story itself. Even just showing their reactions to the story afterwards, how it affected them, would probably have been just enough.

I love, I love, I LOVE the Killdeer universe! And the second story, the one set there, true to form is the best of the three. Anne's got even better at weaving together a fictional dramatic performance and a real problem with high stakes. The dramatic performance by the Aelur reflects the problem beautifully and kind of transcends it, making it into a myth. It's a gorgeous tale - if you like Killdeer, you'll absolutely love it, and if you've never read Killdeer, you *might* have to read the short prequel to this story first (which can be found here: http://www.annebwalsh.com/blog/2015/08/14/But-my-darling-when-I-think-of-thee.aspx)... and then you'll love it anyway. The entire script of the dramatic performance is included as an extra at the end of the ebook, which is a nice touch. The Killdeer shorts are just getting better and better.

On rereading the third story, it's grown on me a bit; I enjoyed it more the second time through. It's really not one story as such, rather twelve little vignettes. Some of them are better than others; I particularly enjoyed the 3rd sign because it has a really heartwarming twist, and the 6th sign because of the humour.