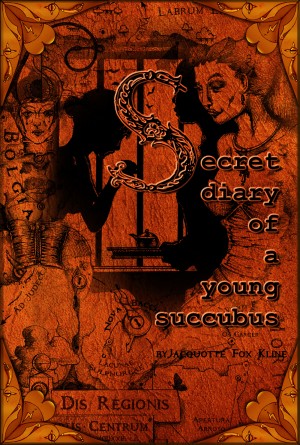 Secret Diary Of A Young Succubus

Jacquotte was an avid reader as a child. Her favorite books were Tolkien's Hobbit and Lord of the Rings trilogy, which she finished at the age of eight. As a teenager, she created adventure stories for high fantasy role-playing games.

She was a high school spelling champion and took a few writing classes in college, but she didn't write real fiction until joining an online group in her early 30s. She learned oodles in the group, honed her skills, wrote countless critiques, and won a few contests.

Jacquotte was particularly influenced by Jack Bickham, a brilliant American professor and writer of westerns (The 38 Most Common Fiction Writing Mistakes [1972], Scene & Structure: How to construct fiction with scene-by-scene flow, logic and readability [1993]).

The novels were all written simultaneously to create the richest, most consistent experience for the reader.

Effing brilliant. I loved every second of this wild ride. I want more and I can't wait to read more from the author.

You have subscribed to alerts for Jacquotte Fox Kline.

You have been added to Jacquotte Fox Kline's favorite list.

You can also sign-up to receive email notifications whenever Jacquotte Fox Kline releases a new book.