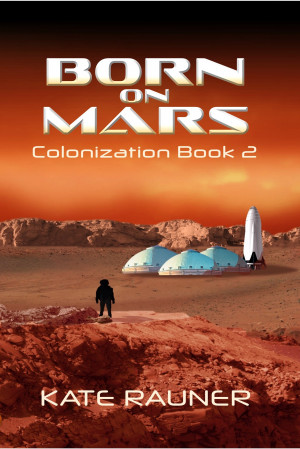 By Kate Rauner
Rated 5.00/5 based on 1 reviews
Contacting recent settlers half a planet away is the only hope for a rebellious young man's failing colony, though the conflicts they bring from Earth could be deadly.

Jake is born into a dying colony, abandoned by Earth, and Mars yields none of the minerals they need to survive. A second colony arrives half a planet away, but visiting the newcomers is more perilous than he imagined. More
Contacting recent settlers half a planet away may be the only hope for a rebellious young man's failing colony, though the conflicts they bring from Earth could be deadly.

Jake is born into a dying colony, abandoned by Earth. Sickness plagues his family, and Mars yields none of the minerals they need to survive. A second colony arrives half a planet away, but visiting the newcomers is more perilous than he imagined.

The newcomers hold the key to survival, if only Jake can understand the conflicts among these Earth-borns from China and Africa. They bring advanced technologies and tantalizing possibilities. But if they forge ties with Jake, they'll defy their masters on Earth and perhaps be abandoned too.

Watch the sun rise through the thin Martian atmosphere and smell the acrid soil that clings to surface suits. Join Jake on adventures far from his home habitat.

I write science fiction novels and science-inspired poetry, and serve as a volunteer firefighter. I'm also a retired environmental engineer and Cold War Warrior (honestly, that's what Congress called us) because I worked in America's nuclear weapons complex. Now living on the edge of the southwest's Gila National Forest with my husband, cats, llamas, and dog, I'm well on my way to achieving my life-goal of becoming an eccentric old woman.

About the Series: On Mars

A one-way journey to Mars may be a mistake. Discover how the first settlers survive and build a colony on the Red Planet.

Also in Series: On Mars

Excellent story of trying to thrive while making do and improvising. The things one has to do to stay alive provides a contrast between local decisions vs decisions and edicts from an remote, earth-based organization.

The original Mars Colony was established two generations ago; it now has people who were born on mars in addition to the people who came from earth. It has had no new equipment, food or people for an entire generation and appears to be adequately self sufficient.

A new second colony which still has missions to supply more resources, people and much newer equipment has less than 20 residents who seem to have more material goods but a tyrannical overseer. Initially it refused to communicate with the original colony and encrypts all communications with earth.

One person from the older colony offers to try to set up a trade and exchange between the two colonies.

Visiting and comparing the two colonies results in a fruitful exchange of information, gifts and companionship that makes both colonies seem to have an interest in mutual aid.

Complications, accidents and political considerations (especially from the earth-governed colony) make for conflicts just like on earth.

Learning to deal with safety and unconventional family units is extremely well done. I doubt that jealousy would be as modest as portrayed. Caring for each other and helping to the best of one's ability is convincingly essential to survival.

One incident of a mars-born person getting flu like symptoms because he did not have immunity was particularly convincing of the dangers of being isolated on Mars. The tools needed to survive outside the habitats including transport and electronic communication are key. The AI which supports the original colony is named "Governor". It can hear all conversations and provide guidance without out being obtrusive or judgmental and knows when to keep quiet.

A must read if you have dreams of settling on Mars.

You have subscribed to alerts for Kate Rauner.

You have been added to Kate Rauner's favorite list.

You can also sign-up to receive email notifications whenever Kate Rauner releases a new book.