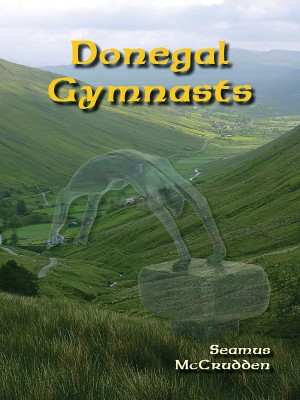 Jack and Jake are twin brothers of Chinese and Irish extraction, growing up in Donegal in the 1960’s with their adoptive parents. Early on, they demonstrate a natural aptitude for gymnastics, setting them apart from their peers, making them stand out. Their ‘twin talents’ are fostered and encouraged by family, friends, teachers and those close to them.

As they mature, the road ahead appears to offer prospects of fame and fortune. Their paths diverge and their lives take different turns when one heads off for England, to pursue a gymnastics career, while the other enlists in the US Army, serving a term in Vietnam. When they meet up again at the Montreal Olympics in 1976, they are competing against each other and representing their adopted countries. They have been through much but growing up under the spotlight teaches them that the bonds of family and friendship are what endure, keeping them close, reminding them of who they are.

Donegal Gymnasts is a tale about people who follow their dreams and determine to conquer whatever obstacles life throws in their way. It is an exploration of love and loyalty with a narrative and storytelling style that is simple but well plotted. As the story unfolds, it peels back many layers, revealing those complexities associated with lives that are intermingled with love, loss, tragedy and triumph.

Seamus McCrudden hails from Glenfinn, in the Irish county of Donegal. Glenfinn is the birth place of Isaac Butt, Glenfinn’s most famous son until local lad, Frank McGlynn, won an All-Ireland medal for Donegal in 2012. He still lives in Donegal, with his wife Breege and four daughters: Aisling, Arlene, Aimee and Megan. He is based in Ballybofey, where he works as a bus and taxi driver. Everyday events and the people whom he encounters in the course of his work have inspired his writing.

He is also involved in local writers and drama groups. He traces his interest in writing and drama back to his childhood. “I was always writing bits and pieces at night but they usually ended up in the bin. Then, about 15 years ago, I got involved in local drama ... . I liked it and took part in a few shows, including a few for the nearby Butt Drama Circle in Ballybofey. That gave me the confidence to go on and go public with my writing.”

Donegal Gymnasts is Seamus McCrudden's first full-length novel. His work has appeared in other media however, including local community newspaper, Finn Valley Voice and in 2014, he came third in the Patrick MacGill poetry competition.

You have subscribed to alerts for Seamus McCrudden.

You have been added to Seamus McCrudden's favorite list.

You can also sign-up to receive email notifications whenever Seamus McCrudden releases a new book.