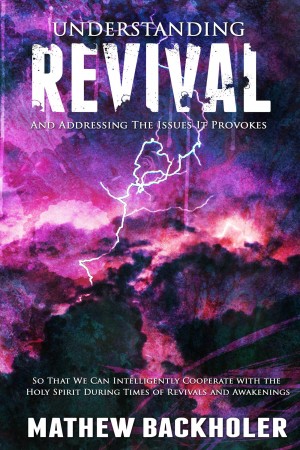 By Mathew Backholer
Updated in 2020. Understanding Revival and Addressing the Issues it Provokes; through the use of Scripture and church history reveals how we can intelligently cooperate with the Holy Spirit during times of revivals and awakenings and not reject His workings due to religious affections, physical phenomena or manifestations and that we may be not be caught unaware of the tactics of the enemy. More
Updated in 2020. Revival is an amazing outpouring of the Holy Spirit as the dew of God's heavenly blessing descends to revive the Church and saves sinners, as God vindicates His name. But history records that many who have prayed for revival have rejected it when it came because they misunderstood the workings of the Holy Spirit and only wanted God to bless the Church on their terms and not His.

During times of heavenly visitations there are Divine paradoxes; times of solemn commotion and Divine disorder which involves sifting and shaking, repentance, brokenness and confession of sin mingled amongst the shouts of praise and adoration as the Refiner comes to prepare a pure and holy Bride, to glorify Jesus. During revival in the midst of God's dynamic, the devil will come to infiltrate and imitate so let us understand revival so that we do not reject it when He comes or bring the work of God into disrepute.

Including: Understanding Revival - What is it? The Beginnings and Characteristics of Revival, Reoccurring Experiences in Revival, Common Characteristics of Physical Phenomena, The Dangers of Revival, Misperceptions of God's Workings, Human Emotions, Disunity Within the Body, False and Spurious Converts, Why Revivals Cease, Warnings and Wisdom, Revival Merchandise and Memorabilia and Evaluating the Past and Looking Forward.

Mathew Backholer is the co-founder of ByFaith Media (www.ByFaith.org) and films and co-presents ByFaith TV which airs on numerous Christian networks around the world. He is the author of a number of books including: Revival Fires and Awakenings, Global Revival, Reformation to Revival and How to Plan, Prepare and Successfully Complete Your Short-Term Mission.
Available ebook formats: epub
Price: $5.99 USD
Buy Add to Library Give as a Gift
How gifting works
Create Widget
Tags: christianity awakening power revival pentecost phenomena revivalism manifestations religious affections
About Mathew Backholer

You have subscribed to Smashwords Alerts new release notifications for Mathew Backholer.