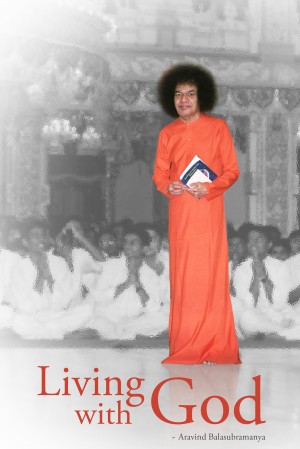 By Aravind Balasubramanya
This book details the life experiences of eighteen students and teachers of Bhagawan’s educational system, which ranges from ‘KG to PG’ (kindergarten to post-graduation). This is just a sample of those that have received ‘Higher’ learning from their Swami – a learning for life. But, this sample will give us a glimpse into what Bhagawan Sri Sathya Sai Baba stands for and what He exhorts. More
Calling Sri Sathya Sai Baba a philanthropist and social reformer would be akin to calling Lord Jesus a shepherd and Bhagawan Krishna a cowherd!

One definitely cannot turn a blind eye to His magnificent work – tertiary healthcare systems, water projects, housing projects, and educational university, which are first-of-a-kind in world history. He has also inspired service activities around the globe with a footprint in over one hundred and fifty countries. He is definitely a social reformer, but He is also much more.

His greatest work is the transformation of the heart, which He has effected through pure, selfless love. Once the source and nature of this Love is understood, one cannot help but call Him divine, adding the prefix ‘Bhagawan’ to His name.

This book details the life experiences of eighteen students and teachers of Bhagawan’s educational system, which ranges from ‘KG to PG’ (kindergarten to post-graduation). This is just a sample of those that have received ‘Higher’ learning from their Swami – a learning for life. But, this sample will give us a glimpse into what Bhagawan Sri Sathya Sai Baba stands for and what He exhorts. It will make it amply clear that it is never too early, or too late to embark on the greatest quest of life – Educare.

Aravind Balasubramanya hails from a family that has been devoted to Bhagawan Sri Sathya Sai Baba for nearly half a century. His father was a photographer of Bhagawan in the late sixties and early seventies in Brindavan and many of the old black and white photographs we see of Swami have have been through his lens.

Inspired by his parents, especially his mother, to spend his life with his Swami, Aravind joined Sri Sathya Sai Vidyapeeth in Calicut, Kerala for his primary education. He joined Sri Sathya Sai Higher Secondary School in Prashanti Nilayam for high-schooling. He followed it with a Bachelors in Science with specialization in Chemistry from the Sri Sathya Sai Institute of Higher Learning for which he secured a gold medal. He continued to complete his Masters in Science (Chemistry) and with the desire to stay with Bhagawan went on to do his Masters in Business Administration (MBA) too.

It was in the Institute that he got several opportunities to speak in the Divine Presence, act in many presentations and plays and also pursue photography which he picked up from his father. He was careful in recording almost every day that he spent in the physical proximity of his Lord via his many personal diaries and photographs.

Blessed by Baba to join Radiosai Global Harmony, which has been singly responsible in spreading the message and life of Bhagawan to all parts of the globe, he currently does a host of activities there including the Thursday Live satsangs, producing documentaries on Swami and his message and, of course, writing articles.

He was Swami’s ‘official’ photographer for nearly 5 years and travelled along with Him during His trips to Hadshi, Mumbai, Delhi and Simla. Photography is not just his hobby - it’s his passion and he has worshipped Swami through it. After Bhagawan’s Mahasamadhi in April 2011, Aravind started to write blogs based on what he had recorded in his personal diaries and experiences of several students. The blogs hit a million views and, based on feedback from readers, he was inspired to contemplate a book.

More than all this Aravind has tremendous love for Swami, his biggest and greatest hero. That's what propels him to excel in any and all endeavours that he takes up - be it writing, speaking, photography or video editing.

You have subscribed to alerts for Aravind Balasubramanya.

You have been added to Aravind Balasubramanya's favorite list.

You can also sign-up to receive email notifications whenever Aravind Balasubramanya releases a new book.