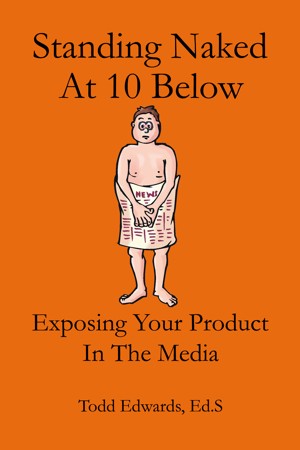 Standing Naked At 10 Below... Exposing Your Product In The Media

By Todd Edwards
Imagine standing naked at 10 below. Feeling frustrated, stressed and helpless; not knowing what to do next in today's difficult economy. That's how most feel, especially when they're trying to get their product or company exposed into the mainstream media. They want to, but just don't know how. I take you on a step-by-step journey and show you how to be your own PR pro without spending a dime! More
“Standing Naked at 10 Below” is an informative guide that focuses on the process of getting your company or product exposed in the mainstream media for free without using a PR professional, buying airtime or obtaining costly media contact and distribution lists. It not only explains how you can look like an expert in your field, but it describes how, in an easy step-by-step way to book television and radio segments about your product, service or idea and to as well, get the newspapers, magazines and blogs to not only look at your company, product, service or idea, but to be interested enough to write a story about it. It also shows and explains in a detailed way how to write and design an effective pitch, how to create a winning media kit, how to obtain almost any media source contact (producers, editors, reporters, anchors, writers, bloggers) from any facet of the media industry that you’d like to acquire without spending a dime, how to create press releases that work, how to design a winning company overview, along with how to intertwine all of these facets into your pitch and finally, what to expect once you book the gig. This is all from the point of view of someone who was initially clueless about the process of product exposure in the media, to booking almost everything that he pitched on his own without the use or expense of any PR agency or affiliation.

Todd Edwards is the creator of the branded writing style Reality Rhyming® that’s based on the premise “If Your Life Was A Poem, What Would It Say?®” and “If Your Pet’s Life Was A Poem, What Would It Say?®” and is considered as a distinguished celebrity poet and an expert in his field. He has designed Reality Rhyming® personalized poems for celebrities such as: Elton John, Justin Timberlake, Oprah Winfrey, Ellen DeGeneres, Martha Stewart, Regis Philbin, Kelly Ripa, Suzanne Somers, Kathie Lee Gifford, NFL Commissioner Roger Goodell, Will I Am, Kelly Ripa, Bill Engvall, Maria Sharapova and many others, along with collaborating with more than 30 philanthropic organizations and charities. His work has been featured on Entertainment Tonight, the TODAY Show, ABC’s Extreme Makeover: Home Edition, NPR and numerous others, as well as being exposed in a vast amount of other media sources and outlets. Todd is also a member of the South Florida Writer’s Association and has his B.A. in Communication, his M.S. in Exceptional Student Education and his Ed.S in Educational Leadership all from Barry University in Miami Shores, Florida, while also working as an English and Writing teacher to Special Needs high school students for Miami-Dade County Public Schools. Todd is also a former USTA #1 state ranked (Florida) and top 10 nationally ranked (United States) tennis player in the 30’s Division of singles, doubles and mixed doubles.

You have subscribed to alerts for Todd Edwards.

You have been added to Todd Edwards's favorite list.

You can also sign-up to receive email notifications whenever Todd Edwards releases a new book.