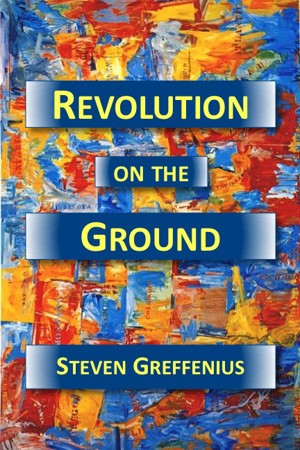 Revolution on the Ground

By Steven Greffenius
ROTG explains why American citizens must alter or abolish their government to preserve their freedom. The book also details the best means of revolution: non-violent, constitutional, based on civil disobedience. Revolution based on citizens' resistance to government can create a successful new republic.

Essays include Means to Resist, States' Rights, Strong Citizens, and Why Torture Matters. More
Citizens who want to replace their government have several options. The standard method is to elect new representatives and a new president. For a long time we have assumed that electorally driven processes will work, but we have discovered they do not.

Another option is a people's movement to force removal of the government. That implies a traditional revolution, often violent, seldom orderly. Few want to follow that course: it's difficult, it is easily branded illegal, and it would not work in this country.

That brings us to a fourth option that complements the third: ignore the national government and replace it with alternate, regionally based institutions of governance. Return governance to the vision of democracy in Tocqueville's Democracy in America, where citizens almost universally participate in their local institutions. The so-called powers that be in Washington were just not that important: in particular, people didn't send their money there. The problem with this vision is that it could and perhaps ought to lead to separate, autonomous regions. Citizens are loyal to their country, and many would not want to see it break up.

Revolution on the Ground considers the problems and prospects associated with the third and fourth options, identified here with a constitutional convention and civil resistance. It explains why these plans are the most practicable means among those available. Lastly, it explains why these two methods, despite their difficulties, are most likely to work.

So let's start exploring. Remember as we travel that a country and a government are not the same thing. Yes, citizens of a democratic republic are responsible for their governing institutions and the quality of their leadership. Still, just as the Marine who stands guard during the midnight watch is not responsible for an illegal war or a surprise attack, busy citizens betrayed by their leaders are not to blame when their leaders destroy democracy. All they can do is resist. They must resist, and remember who betrayed whom. To save their country, they must alter or abolish their government.
Available ebook formats: epub mobi pdf rtf lrf pdb txt html
First 20% Sample: epub mobi (Kindle) lrf more Online Reader
pdb
Price: $0.99 USD
Buy Add to Library Give as a Gift
How gifting works
Create Widget
Tags: democracy revolution constitution
About Steven Greffenius

I was born in Minneapolis in 1954; grew up in Valley City, North Dakota; graduated high school in Des Moines, class of 1972; graduated from Reed College in 1976 with a bachelor’s in history; married Leslie Olin from Boston in 1979; served as gunnery and electronics material officer on the USS KIRK based in Yokosuka, Japan, until 1982; earned a doctorate in political science from the University of Iowa in 1987; and taught politics at the University of Wisconsin–Madison, the Hopkins-Nanjing Center in Nanjing, China, and Carthage College in Kenosha, Wisconsin.

Currently I’m a technical editor at Conexant Systems in Waltham, Massachusetts. My wife and I have a son who lives in Washington DC, and a daughter in junior high school. We live in a great house in Westwood, Massachusetts, southwest of Boston.

Reviews of Revolution on the Ground by Steven Greffenius

You have subscribed to Smashwords Alerts new release notifications for Steven Greffenius.

You have been added to Steven Greffenius's favorite list.

You can also sign-up to receive email notifications whenever Steven Greffenius releases a new book.