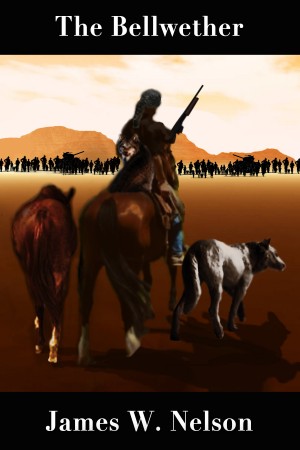 By James W. Nelson
The Bellwether (The mother of all disasters) Aaron Hodges, 32, has one month to take his future colonists 300 miles to northern Minnesota wilderness…not by truck but overland across farmland and forest by horse and wagon, but first he has to convince them to want to go.
This is a long novel. For the sake of the reader, in the back of the book is a character list and the main ones described. More
Think of the 1800s, the wagontrains, and the people who crossed the prairie looking for a better life. Now fast-forward to the new millennium and the worldwide economy totally crashing, causing unbelievable chaos and violence. During the last days of his Montana cattle ranch job, Aaron Hodges learns through Native American prophecy, of the bad days coming and envisions building a hidden colony to ride out the likely decades-long crisis. But first he must grow up a bit. After a long, long, absence, he finally goes home and gets back in touch with Caroline, the love-of-his-life, but nothing goes right so he takes a break in Las Vegas, wins a ton of money, comes back to Minnesota, buys a farm, begins a battle with Agribusiness vs. the environment, loses, continues seeing chaos growing, so seriously begins planning the colony again.
He has a list of old friends he wants to come along and help in the development, but nobody really sees the need, especially Caroline, who absolutely refuses to go, and Aaron won’t go without her, and he’s running out of time. They need to get where he wants to go early enough in the season to plant crops, but he has to convince his friends to want to go.
The declaration of martial law changes things; they no longer have the option of taking a caravan of trucks down the highway.
Set in the near future, novel runs for two years. The main theme is a modern-day wagontrain with over sixty people driving sixteen covered wagons pulled by four-horse teams for 30 days across 300 miles from southern Minnesota farming country to northern Minnesota wilderness.
When the crash comes nobody can point a finger and blame a specific thing. The United States and the world are locked in drought, stagnant economy, and rampant pollution. Too many people are wasting too much, demanding too much standard of living, and too much money is creating too much free time and entertainment, for, as one height is reached boredom prevails, and more and greater thrills are demanded.
More wood, more metal, more food and drink, and more oil.
The oil flow stops.
Then the flow of supplies stop. The civilized world finds itself trapped inside a steel, concrete, and plastic wasteland with no utilities, no food, no water.
And no gasoline.
Background themes include the economy, environment, and a shadowy ‘master race’ organization out to eliminate the Native American. This novel is character-driven, just normal people loving and finding love, surviving, and reacting to circumstances as best they can. You will like the characters, you will care what happens to them, and at the end you will cheer.
Available ebook formats: epub mobi pdf rtf lrf pdb txt html
First 20% Sample: epub mobi (Kindle) lrf more Online Reader
pdb
Price: $3.99 USD
Buy Add to Library Give as a Gift
How gifting works
Create Widget
Tags: environment horses native american economy minnesota contemporary wagon train organic faming
About James W. Nelson

Reviews of The Bellwether by James W. Nelson

You have subscribed to Smashwords Alerts new release notifications for James W. Nelson.