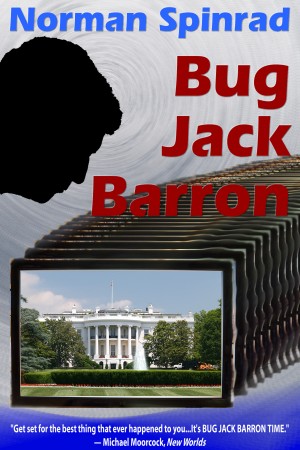 By Norman Spinrad
Lover and hero, Jack Barron, the sold-out media god of the Bug Jack Barron Show, has one last chance to hit it big when he meets Benedict Howards, the power-mad man with the secret to immortality. (Hugo and Nebula Award finalist)

Norman Spinrad is the author of over twenty novels, including BUG JACK BARRON, THE IRON DREAM, CHILD OF FORTUNE, PICTURES AT 11, GREENHOUSE SUMMER, and THE DRUID KING.
He has also published something like 60 short stories collected in half a dozen volumes. The novels and stories have been published in about 15 languages.
His most recent novel length publication is HE WALKED AMONG US, published in April 2010 by Tor.
He's written teleplays, including the classic Star Trek, “The Doomsday Machine,” and two produced feature films DRUIDS and LA SIRENE ROUGE. He is a long time literary critic, sometime film critic, perpetual political analyst, and sometime songwriter.
He's also briefly been a radio phone show host, has appeared as a vocal artist on three albums, and occassionally performs live. He’s been a literary agent, and President of the Science Fiction Writers of America and World SF. He’s posted 21 YouTube videos to date.
He grew up in New York, has lived in Los Angeles, San Francisco, London, and Paris, and travelled widely in Europe and rather less so in Latin America, Asia, and Oceania.

You have subscribed to alerts for Norman Spinrad.

You have been added to Norman Spinrad's favorite list.

You can also sign-up to receive email notifications whenever Norman Spinrad releases a new book.