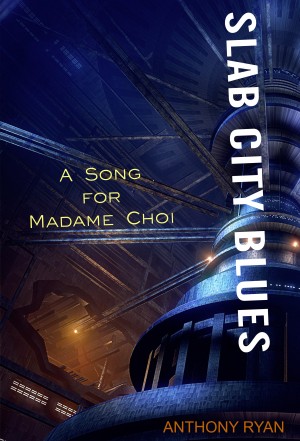 Reviews of Slab City Blues: A Song for Madame Choi by Anthony Ryan

Anthony Ryan really does write like he is a cross between Neal Stephenson and William Gibson wrapped together and then put in a dark closet with the lights off, with monsters on the inside. These Slab City Blues novellas, are utterly fantastic.

THE PLOT: This one is about a missing girl, who turned up on the Slab with some bodyguards. McLeod is messaged by an unidentified person on his Smart (a communications device - phone, tablet, assistant, and everything else you could want). The person who sent it was someone who he knew in the war, he is now the biggest criminal kingpin on the Slab, and Inspector McLeod knows it. The Kingpin, thinks of McLeod as a friend, but Mcleod wants to shoot him on sight. McLeod goes to see him, he shows him a picture of the girl on a Smart, and says she is lost, the bodyguards are dead, and McLeod needs to find her. He goes hunting in places where even he doesn't like. The plot twists and turns and in the end, we find that honor is still alive in the most depraved creatures under the right circumstances and that redemption is something that even the evil hope for. This is a tragedy with a moral. We find: lying bar owners, song singers, former rat fighters, drug dealers, massive shoot outs, set ups, heirs, suspensions, human drug factories, hospitalizations, surprise obfuscations, tragedy, a hope for redemption, and finally death.

SETTING: The Slab is no charming place, with a ten to one ratio of people that it was designed to hold, it rains sweat in the scummy areas. There are good areas too, but they have been taken over by Drug Lords and Criminal Kingpins, along with Military Veterans who took over part of the orbital and nobody complained. Mostly, it is a slum, with gene spliced humans that resemble anything imaginable, including tigers, vampires, weres, and other combinations of humans and creatures. In these areas the Slab is not only over crowded, it is dirty, drug riddled and dangerous. Average people won't go into these areas because they'll be killed almost instantly for their valuables and money, not to mention their body parts. There is a hot industry in body reconstruction, and the parts have to come from somewhere, unless they are synthetic, which a lot of them are. But glands, and hormones and such are hard to recreate, so they need fodder for the industry. Some people are just never seen again.

CHARACTERIZATION: Ryan's style is terse, almost abrupt, but in those few words, he can describe exactly what a person is, from the outer shell, to deep down inside. He is amazing that way. So few words, for such a huge pay back. His characters are all three dimensional, with obvious flaws, foibles and quirks. He makes them seem real. He makes them come alive. Even the secondary characters get this treatment. He is a master of understatement, and yet everything vital that needs to be said, gets said. There is all meat on those bones - no fat. I don't know how long it takes to write like that. Does he pare it down in editing? Does he write like that naturally? I have no idea. But the result is the same, a text that has no extra words - not a single one. You couldn't cut it down if you tried without cutting out essential storyline.

DIALOGUE: Inspector McLeod is a Demon (read cop) and so he talks like a cop. Blunt and to the point. his colleagues talk like that too, but with a bit of restraint. The criminals are more wordy, but they each have a style of their own, depending who they are, their background, what crimes they commit, and what they are trying to hide from him. Nobody is verbose in the book. Nobody is verbose on the Slab. It would not make sense if they were. Most are criminals, and they don't want to incriminate themselves. Even the rich people on the Slab (read Drug Lords and Criminal Kingpins), don't talk much, though their speech is much better educated then the average splice on the street, or the Demon on the beat. I think the dialogue was appropriate for the people of the Slab. It is terse, sometimes aggressive, sometimes profane. It is always in the person's best interest, never giving anything away.

THE ENDING: The ending was perfect for the novella, even though it was tragic. There was one scene I'll always remember. Madame Choi is singing a song from her homeland. She is singing beautifully. Everyone has stopped to listen. The girl is in her lap, looking at her with eyes of love, and trying to sing along. Madame Choi is looking back with love in her eyes as well, knowing she is about to make the ultimate sacrifice for this girl, but she just keeps singing beautifully, never letting anything stop her. It was such a poignant picture, as Madame Choi did some horrific things in the war and afterwards as a criminal and bar owner, that this one little scene of innocence and potential redemption was really quite touching. The ending was not only exiting, with it's hail of bullets, and it's bodies flying, but it showed that even the evilest of people could do the right thing under the right circumstances. I'd give Ryan an extra star for the ending, but I'm already topped out.

I would recommend this book to anyone who likes adventure, police procedurals, science fiction, dark fiction, and tough guy novels. This is the best I've seen since Gibson and Stephenson, and I'll bet that once he gets noticed, Mr. Ryan will be on the gravy train too. Just you wait. I'm putting him on my list of authors to watch in 2012 on my blog http://www.mlbibliophile.blogspot.com. This man's a gem, and so are all his books, so go get them now on http://www.smashwords.com search anthony ryan. They are they only place that has all three novellas and his novel, which is excellent too. Go get them right now, while they are inexpensive (the first two are free). It won't last long, so do it right away!