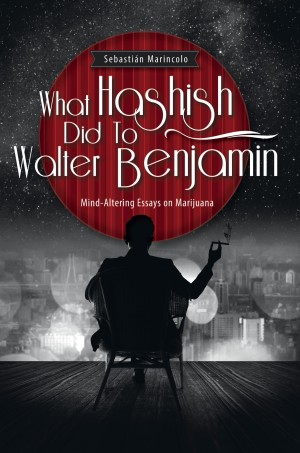 What Hashish Did To Walter Benjamin

By Sebastian Marincolo
Can a marijuana high enhance cognitive abilities? How much did cannabis inspire outstanding personalities like Charles Baudelaire, Walter Benjamin, Billie Holiday, John Lennon, Carl Sagan, and so many others? “What Hashish Did To Walter Benjamin” is a collection of 20 groundbreaking neurophilosophically inspired essays on the astounding positive potential of the marijuana high. More
What is it like to be high on marijuana? Can a marijuana high help to remember long gone events, to fuel your imagination, to work creatively, to come to introspective and other insights, to empathically understand others, and to personally grow? How much did cannabis inspire outstanding thinkers, artists and musicians like Charles Baudelaire, Rudyard Kipling, Walter Benjamin, Billie Holiday, Diego Rivera, John Lennon, Carl Sagan, Hal Ashby, and so many others? And how much did the marijuana high positively transfom our society?

“What Hashish Did To Walter Benjamin – Mind-Altering Essays on Cannabis” is a collection of 20 groundbreaking neurophilosophically inspired essays on the astounding positive potential of the cannabis high. The essays summarize more than ten years of Marincolos research and are written for a wide audience. This deep new exploration of the marijuana high as an altered state of consiousness addresses educated marijuana users and their relatives, medical cannabis professionals and patients, as well as neuroscientists, psychologists, and philosophers interested in the subject of altered states of consciousness.

Dr. phil. Sebastián Marincolo is a former student of the philosophers William G. Lycan, Simon Blackburn, and Manfred Frank. His research focuses on the philosophy of mind, neurocognition, and on altered states of mind. Marincolo has published various articles on the marijuana high, co-edited bewusstseinserweiterungen (“mind expansions”), an issue of the German internetzine “parapluie”, and published three books on the marijuana high: the study “High. Insights on Marijuana” (Dogearpublishing, Indiana, USA, 2010), the essay collection, “High. Das positive Potential von Marijuana” (in German, Klett Cotta/Tropen, Stuttgart, Germany, 2013), which contains his macro art series “The Art of Cannabis”, and the essay collection “What Hashish Did To Walter Benjamin” (Khargala Press 2015).

Marincolo also worked with marijuana expert Harvard Associate Prof. Emeritus Lester Grinspoon on a book project. For more than five years he was a creative director and consultant for one of the biggest foundations in Germany and has more than 25 years of experience as a freelance photographer. His art photography from New York City, Rio de Janeiro, Bali and other places has been shown in various exhibitions and art galleries in Germany and the U.S. He is currently living in Stuttgart, Germany, and works as a freelance writer, creative consultant and photographer.

You have subscribed to alerts for Sebastian Marincolo.

You have been added to Sebastian Marincolo's favorite list.

You can also sign-up to receive email notifications whenever Sebastian Marincolo releases a new book.