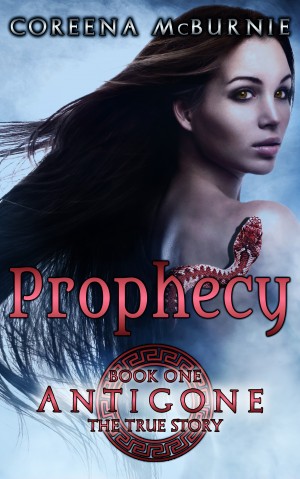 By Coreena McBurnie
Rated 5.00/5 based on 1 review
When the mysterious and devastating prophecies surrounding her family are revealed, Antigone, a princess in ancient Thebes, must choose where her allegiance lies: With the gods who have betrayed her family but who she is obliged to serve? With her plague ridden city? With her family which lay in ruins? Or even with herself? More
An ancient princess, hidden prophecies, impossible choices...

Sixteen year old Princess Antigone, daughter of the infamous ancient Greek King Oedipus, wants to lead a normal life and fulfill her duty to the gods, her city, and her family, but fate has other plans. The Olympian gods bless her, the snakes talk to her, her parents want her to marry a foreign prince, her embroidery looks like burial shrouds for dogs, and she has fallen in love with the wrong boy.

When the mysterious and devastating prophecies surrounding her family are revealed, Antigone must choose where her allegiance lies: With the gods who have betrayed her family but who she is obliged to serve? With her plague ridden city? With her family which lay in ruins? Or even with herself?

In Prophecy, Book One of the Antigone: The True Story series, Antigone steps out of the shadows of the past to tell her own story, a story where truth of history is stranger than the fiction of myth.
Available ebook formats: epub mobi pdf lrf pdb txt html
First 20% Sample: mobi (Kindle) lrf pdb Online Reader
Price: $2.99 USD
Buy Add to Library Give as a Gift
How gifting works
Create Widget
Tags: historical fiction sisters myths and legends ancient greek mythology historical retelling mythology fantasy legends and curses teen and young adult fantasy duty and honor heroine strong woman
About Coreena McBurnie

My name is Coreena McBurnie and, ever since grade 5 when I had to do a report on Theseus and the Minotaur, I have had a soft spot for Greek mythology. When I hit university, I was drawn to the Classical Studies department (earning both a BA & MA), where I explored the archaeology and culture of the ancient Greek and Roman worlds — and also where I managed to read Homer’s Odyssey, one of my absolute favourite books, in the original Greek, something which was thrilling for me (I know, sounds crazy, but the poetry and scope of the original text is amazing). After a lifetime of “what is that?”, “why did you study that?”, and “what can you do with a degree in Classical Studies?” I have decided to write novels based in ancient myth and to bring so many of the stories I love to life for a modern audience, with my own spin, of course.

Prophecy, Book 1 in the Antigone Series, is my first published novel. Currently I am working on Book 2 in the Antigone Series, called Fate. I am also in the middle of another novel about Clytemnestra who is notorious in Greek myth for killing her husband, Agamemnon, when he returned home from the Trojan War. I love exploring the motives of strong women in ancient myth.

I live in BC, Canada with my husband, our three kids, and our cat, in a beautiful part of the country, on two rivers, surrounded by ranches, near ski hills, and only a couple of hours drive to the ocean.

Reviews of Prophecy by Coreena McBurnie

I was totally engrossed in this story, couldn’t put it down, and read it in one day! I’m looking forward to the next book in the series.

You have subscribed to alerts for Coreena McBurnie.

You have been added to Coreena McBurnie's favorite list.

You can also sign-up to receive email notifications whenever Coreena McBurnie releases a new book.