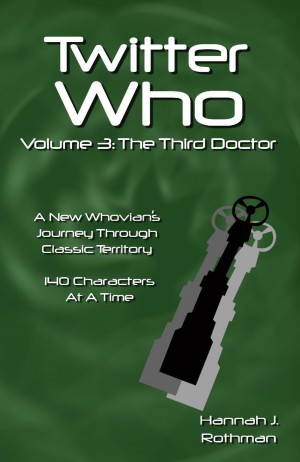 Hannah J. Rothman is an American Whovian who came to the party a little late. By the time she started watching Doctor Who, the 2009 specials were well underway and by the time she was officially a fan, the Tenth Doctor was pleading "I don't want to go." She spent the following year (particularly that summer) soaking up as much Classic Who as humanly possible, drawing fan art, contributing to the fanzine The Terrible Zodin, developing preposterous amounts of head-canon for the Fifth Doctor and his original trio of sadly underdeveloped companions, and making some wonderful friends in the fandom online. There was also a lot of Tweeting. Hannah sports a BA in English and currently lives in New York, where she has thankfully never encountered any Daleks on the Empire State Building.

Reviews of Twitter Who Volume 3: The Third Doctor by Hannah J. Rothman

You have subscribed to alerts for Hannah J. Rothman.

You have been added to Hannah J. Rothman's favorite list.

You can also sign-up to receive email notifications whenever Hannah J. Rothman releases a new book.