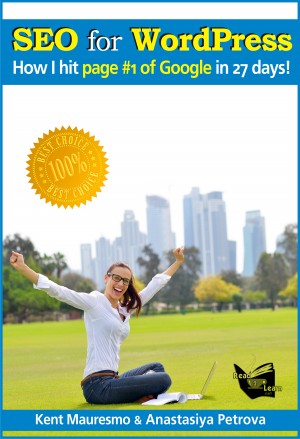 My name is Kent Mauresmo. I’m a web developer and I specifically focus on SEO and search engine marketing. I’m one of the webmasters and content creators for read2learn.net, seocompanylosangeles.us, and many other websites. I’m also one of the authors of the book, “How to Build a Website with WordPress…Fast!” If you’ve already read that book, then you should be familiar with a few of our basic SEO techniques.

Kent worked as an Account Executive at an Investment Banking firm from 2006-2009. Bored with his career choice, in late 2009 he went back to school and took a crash course in Graphic Design and Computer Programming.

In April 2010, he launched his first website at Read2Learn.net which encourages people to read books to learn new skills.

He tries to read at least one book per week. He used to be one of those people who would never pick up a book because he thought they were boring.

Everything changed when he discovered "How To.." books on Amazon which he finds very interesting. Now he's officially a book nerd, and he's always learning something new.

Based on his experience, he's believes that anyone can learn how to do anything if they truly have the desire to learn and succeed.

With so much mis-information being passed around the internet, Kent Mauresmo teamed up with Anastasiya Petrova (another book junkie) and decided to write their own books.

Kent and Ana's books are created out of frustration. Simply put, they've had to read countless blog, countless books, and have watched countless videos to find solutions to their problems.

They simplify everything that they learn from multiple sources, and then combine the most useful information in their books to help save people time.

Their first book entitled,"How To Build a Website With WordPress...Fast!" was released February 20, 2012 and became a best seller within the first 30 days.

Their second book entitled,"SEO For WordPress..Beginners Guide" was just released May 30, 2012 (Four days ago from today's date). With their growing fan base, this book is sure to become a best seller as well.

You have subscribed to alerts for Kent Mauresmo.

You have been added to Kent Mauresmo's favorite list.

You can also sign-up to receive email notifications whenever Kent Mauresmo releases a new book.