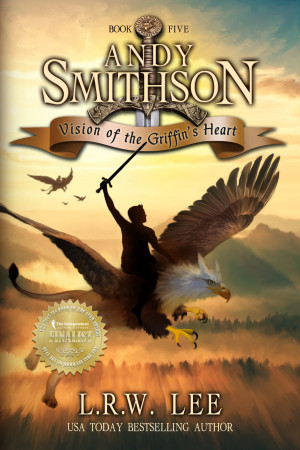 By L. R. W. Lee
Over a year later, Andy receives a clue for the fifth ingredient needed for the curse-breaking potion, the claw of a griffin. There's one not-so-small problem however--humans have stolen treasure from griffins and now these creatures don't take kindly to humans. While away in Carta, fears over an imminent attack materialize and Abaddon with his new mage, Fides, enact a campaign of terror. More
Will Andy overcome impossible odds or will Abaddon prevail?

The evil Abbadon, king of Oomladee's northern neighbor Hadession, steps up his attacks on Andy and Mom at home in Lakehills, TX over the next year, unnerving Andy as he overhears speculation that Methuselah may no longer be able to defeat this nemesis.

Andy arrives back in Oomaldee and receives a clue for the fifth ingredient needed for the curse-breaking potion, the claw of a griffin. There's one not-so-small problem however--griffins don't take kindly to humans.

Scroll up and buy this book now!

"This book is my new favorite of the series. Once I got halfway through it I couldn't put it down!" - Hannah Miles, Reviewer

USA Today Bestselling author L. R. W. Lee enjoys writing epic fantasy for both Young Adult as well as New Adult. She loves writing fantasy because her characters are everything she's not in real life. For example, L. R. W. can't handle scary movies, Stephen King novels, or cockroaches. And she knows she wouldn't last long in one of her books. But give her a drink and a Hawaiian sunset and she'll be just fine. She lives in scenic Austin, TX with her husband.

Would you like to favorite L. R. W. Lee?

You have been added to L. R. W. Lee's favorite list.