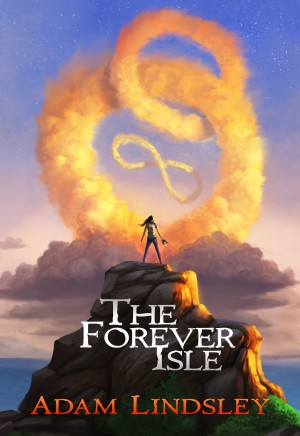 By Adam Lindsley
After 12-year-old Elsa Batiste loses an eye in an accident, her parents move her to an isle so tiny that only four other people live on it. But something's not quite right on Rogue Island. Like the rocks with strange symbols on them that only Elsa can see. Or the attack she witnesses on one of her neighbors. Or how she keeps feeling drawn to the forest at the center of the center of the island... More
The car crash changed everything. Pulled from the wreckage horribly scarred and minus an eye, Elsa Batiste now lives on a tiny island in the middle of Puget Sound with only her boring parents, four quirky neighbors, and her cat to keep her company. At least there's no danger of getting in another crash here.

But something's wrong on this seemingly peaceful island haven. Maybe it's the strange symbols on the rocks that only she can see. Or the way her neighbors have started acting even more peculiar than usual. The night when Elsa happens to see an attack on sweet old Ms. Raven seals the deal: something is definitely up on Rogue Island.

Oddly enough, no one seems to care about the incident but Elsa. Certainly not her parents, who think she imagined the whole thing. And her neighbors--even sweet old Ms. Raven--assure her that everything is absolutely positively fine, nothing to worry about, thank you very much.

Determined to prevent a second attack, Elsa begins an investigation that unravels a fiercely protected secret kept safe on the island for centuries. The deeper she digs into the mystery, the scarier (and weirder) it gets, and the discovery of Rogue Island's astonishing true nature leaves Elsa faced with the most important decision of her young life.

I was born in 1981 in Astoria, Oregon, and spent the first 18 years of my life across the Columbia River on the Long Beach Peninsula in Southwest Washington. Neil Gaiman's wonderful quote about being a "feral child raised in libraries" could just as easily describe my own youth, as I spent an ungodly chunk of my summers and after-school hours in the stacks with my nose in the spine of some fragrant old tome. After six years in Los Angeles, California, and two in Austin, Texas, I returned to the Pacific Northwest and now reside with my wife in Portland, Oregon.

Reviews of The Forever Isle by Adam Lindsley

You have subscribed to alerts for Adam Lindsley.

You have been added to Adam Lindsley's favorite list.

You can also sign-up to receive email notifications whenever Adam Lindsley releases a new book.