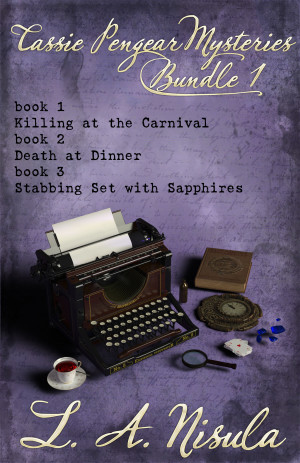 Killing at the Carnival- Cassie Pengear thought a visit to the carnival would be fun: see some shows, eat some sweets, help her landlady’s nephew decide if the cowboy was real or an actor. But then the cowboy shot the volunteer, and he didn’t get up. Now Cassie has a ten-year-old boy insisting the cowboy isn’t a killer and a landlady insisting she help solve the killing at the carnival. 29,000 words, print version 126 pages

Death at Dinner- Cassie Pengear did not want to spend her evening acting as a parlor maid even if the house was in Mayfair, but her landlady’s friend was desperate and it was only night. But then one of the guests collapsed at the table. Now poison is suspected and the cook is convinced she’s the main suspect and will be locked away if Cassie doesn't solve the death at dinner. 56,000 words, approx 220 pages

Stabbing Set with Sapphires- Cassie Pengear thought a job typing up inventory lists at a jewelry store would be fun. Until there was a kidnapping. And then a robbery. And then a murder. Now Cassie must figure out the connection between the events and hope it will lead her to the missing girl. approx. 68,000 words, print version 246 pages

In a Victorian England that almost existed, a steampunk London where tinkerers and clockwork devices exist alongside hansom cabs and corsets, murder is still solved by traditional observation and intuition. This is the London where American typist Cassandra Pengear finds herself stumbling over corpses and helping Scotland Yard detectives solve murders (although they inexplicably prefer to call it interfering). Follow her adventures in the Cassie Pengear Mystery series, beginning with The Killing at the Carnival.

You have subscribed to alerts for L. A. Nisula.