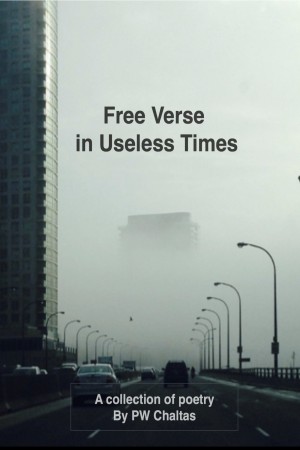 By P. W. Chaltas
What is the truth? A gift of the human condition to the self. What are the current, and enduring questions relevant to everyone? Can we answer all of them? Let us thread through the lives of famous, infamous, and anonymous, inclusive of love, lust, nature, the current day material world, and find the invisible and organic ties that bind us together. More
What is the truth? A gift of the human condition to the self. Free Verse in Useless Times is the first collection of poetry ever published by the author. Peter W. Chaltas has written 14 collections of poetry over many years. This is the first to be released. The poetry addresses questions that concern everyone. Free Verse in Useless Times asks questions about the truth of the human condition, speaks about nature, about beauty, and about what may transcend the finite human existence. It is poetry inclusive of error, lust, the modern day material world, and the politics of exclusion, as well as of love, forgiveness, and spirituality. Threading through the lives of the famous, infamous, and anonymous, it alludes to invisible and organic ties that bind all of us together. It is a poetry of questions, some of which ultimately remain unanswered.
Available ebook formats: epub mobi pdf rtf lrf pdb txt html
First 10% Sample: epub mobi (Kindle) lrf more Online Reader
pdb
Price: $3.99 USD
Buy Add to Library Give as a Gift
How gifting works
Create Widget
Tags: nature love death truth lust human condition paris current events one world economic and political woes
About P. W. Chaltas

Peter W. Chaltas is an entrepreneurial poet and has been writing poetry since the age of 16 when his father passed away. He was educated at Trinity college at the University of Toronto and majored in Literature and Philosophy. In his fifties, he became an online twitter poet. His work has since been published in online publications like Levure Litteraire, Lakeview Journal, Paper.li and Twimagination, as well as on his website Pwchaltas.com. Over the years, he has written 14 collections relating to art, poetry, creativity, love, loss, death,and nature. The One, spirituality, the figure of Christ, and the alienation and loneliness of the immigrant, the forgotten outsider, and the survivor are also dominant themes in his work. These poems were meditations and therapy written for himself that, until recently, were unpublished, and shared with only his closest confidants. After many years of consideration, he is now publishing his works.

A self described "Willing servant of the Word and art", some of Peter's own personal favourite aphorisms are "The eye is a lily on arched stem bending down observing every thing", "One can be more than One, at One time" as well as Moshe Safdie's maxim "He who seeks Truth shall find Beauty".

Peter is also actively involved in, and blogs on topics such as entrepreneurship, and fashion and has had a long and varied career as an entrepreneur. He has a background in graphics and apparel; been a restauranteur; and a real estate agent and investor. He is passionate about poetry, photography, and art. In his heart of hearts his essence is that of artist and poet musing on the truths of the human condition.

You have subscribed to alerts for P. W. Chaltas.

You have been added to P. W. Chaltas's favorite list.

You can also sign-up to receive email notifications whenever P. W. Chaltas releases a new book.