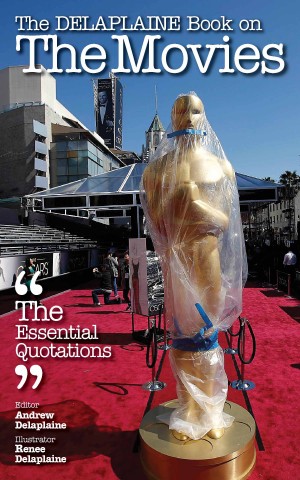 The Delaplaine Book on the Movies - The Essential Quotations

By Andrew Delaplaine
Here are the most essential quotations about THE MOVIES, culled from as wide a variety of source materials that are available.

They have been compiled, edited and carefully selected for inclusion in this book by that well-known Quote Monger, Andrew Delaplaine.

Writes both adult and children’s fiction and adventure stories, including the Jack Houston St. Clair political thriller series and the Sherlock Holmes IV mystery series, as well as a series of travel guides. He has directed 7 independent films and shorts, written 5, and produced 5.

He also co-created and co-produced "A Wonderful World," a musical based on the life of Louis Armstrong told from the perspective of his four wives.

In the past, he owned a famous nightclub on South Beach (The Warsaw Ballroom), published the longest-running paper on South Beach, "The Wire," and produced (for several years) a weekly TV show, "The Live Wire."

He has no hobbies.

You have subscribed to alerts for Andrew Delaplaine.

You have been added to Andrew Delaplaine's favorite list.

You can also sign-up to receive email notifications whenever Andrew Delaplaine releases a new book.