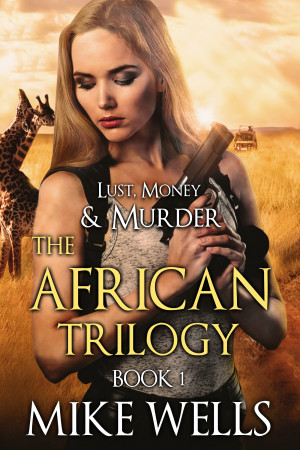 By Mike Wells
When Elaine Brogan and Nick LaGrange are called to meet with Raj Malik at the American Embassy in Paris, it kicks off a treacherous adventure that neither of them could have ever imagined. Join Elaine, Nick, Luna Faye, Tony, Dimitriy, and more from the best selling series in another Mike Wells "unputdownable" book. More
When U.S. Secret Service Agent Elaine Brogan and her husband are called to the American Embassy in Paris, they believe they’re about to receive an award. Instead, they’re separated and thrown into a treacherous adventure that neither of them could have ever imagined. From a black site at some unknown location, to Morocco, to Chad, and finally to the war-torn region of Darfur, Elaine fights to free herself and arrest the man responsible. In addition to Elaine and Nick, the The African Trilogy features the usual cast of Lust, Money & Murder characters - Luna Faye, Dmitry, Tony, and the notorious Giorgio Cattoretti.
Put on your seatbelt and prepare yourself fo another wild, ‘unputdownable’ ride.

Note: This book was previously titled: Lust, Money & Murder, Book 7 - Off the Grid

About the Series: Lust, Money & Murder

You have subscribed to alerts for Mike Wells.