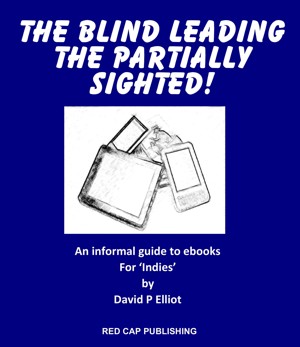 The Blind leading the partially sighted!

By David P Elliot
A short and amusing book written by Independent Author David P Elliot designed to help uninitiated 'Indie' authors to appreciate ebooks and how to get them published with the minimum of technical knowledge!

David P Elliot was born in Reading in the UK and, apart from 8 years in the Police Service in the 1970s, he spent almost 30 years in the IT industry before leaving to concentrate on his first love, writing.
His debut novel ‘CLAN’, to which ‘The Gathering’ is a sequel, is a historical, supernatural thriller, first published in December 2008 and so far has sold in 16 countries, as well as being translated into German and can be downloaded as an audio book in MP3 or iPod formats narrated by the author.
He has 3 grown up children and 3 grandchildren one of which inspired the novel.
He now lives in Faringdon UK, with his partner Monika, a native of Munich.
‘Pieces of Fate’ his second book is an anthology of short stories in the ‘Tales of the Unexpected’ mode and is available in paperback or as an e-book, with the individual stories available only in e-book form.
He is also working on developing ‘Clan’ as a feature film.
You can find out more at www.davidpelliot.com

You have subscribed to alerts for David P Elliot.

You have been added to David P Elliot's favorite list.

You can also sign-up to receive email notifications whenever David P Elliot releases a new book.