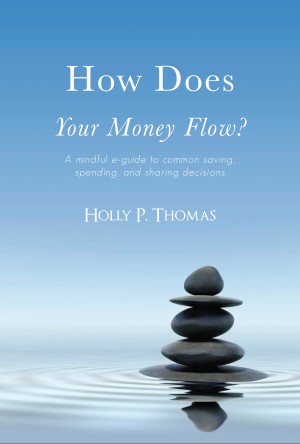 How Does Your Money Flow? A Mindful E-Guide To Common Saving, Spending, and Sharing Decisions

The book first looks at savings decisions, and especially the tension created between saving for children's college and saving for retirement. Next, spending decisions in major areas of life are examined with the angle of understanding where our true sources of happiness lie, and how often we overestimate the money required to get us there. Finally, sharing decisions - whether to give money or lend to family and friends; how much to give to charity; and how to plan for what we leave behind - are discussed.

Each section comes with self-assessment questions, so that you come away with answers unique to you. Knowing your own level of needs, wants, and wishes, you can then use this knowledge to plan for what you truly need to save, spend, and share; rather than relying on what society, friends, family, or even professionals might tell you. Learn to let your money flow - in and out of your life - in ways for which you have prepared.
Available ebook formats: epub mobi pdf rtf lrf pdb txt html
First 15% Sample: epub mobi (Kindle) lrf more Online Reader
pdb
Price: $3.99 USD
Buy Add to Library Give as a Gift
How gifting works
Create Widget
Tags: financial planning money management financial abundance retirement planning financial planner money tips financial goals financial decision making budgeting tips money consciousness
About Holly P. Thomas

Before starting a fee-only financial planning practice in 2006, Holly P. Thomas, now Holly Donaldson, spent 21 years in banking, primarily with First Union/Wachovia (now Wells Fargo), where she served as a Senior Vice President in the Private Wealth Management division. During her banking career, she was nominated by one of her clients and featured in Inc. magazine as a “Banker You’ll Love.”
Holly has been a featured speaker on the psychology of money in diverse venues, from university classrooms to national conferences. Quoted in the Wall St. Journal, InvestmentNews, Financial Advisor, Money, and More magazines, her area of interest is money’s part in family and professional relationships. Her 2013 book, The Mindful Money Mentality: How to Find Balance in Your Financial Future, was called “..a great addition to an advisor’s shelf, as well as a hugely valuable book for clients who are at a personal and financial crossroads” by NAPFA Advisor magazine.

Holly holds 2 master’s degrees from the University of South Florida: an MBA in Finance and MIS; and an M.A. in Economics. She received her B.A. in Economics from Davidson College in 1986 and CFP® certification in 2004.

A Florida native who studied in India, Holly enjoys cooking Asian cuisine, hiking, birding, and snowskiing. She has no kids, no pets, and all plants entrusted to her care have passed on.

Reviews of How Does Your Money Flow? A Mindful E-Guide To Common Saving, Spending, and Sharing Decisions by Holly P. Thomas

You have subscribed to alerts for Holly P. Thomas.

You have been added to Holly P. Thomas's favorite list.

You can also sign-up to receive email notifications whenever Holly P. Thomas releases a new book.